As Goldin Auctions launches its 2021 year, the first Goldin Elite Auction has shattered all previous records for a single first auction day. The three-week long auction ending Jan 30-31, recorded $9 million in bids in just its first day, which doubled the highest recorded one-day total in the company’s history (exclusive of final day) and is easily the highest recorded one-day bid total in online sports auction history. To accommodate the demand for its auction services, the company has expanded its 2021 schedule and is releasing its plan for the first four months of the year.

Founder and Chairman Ken Goldin stated: “The demand to participate in the quality product we bring to market is overwhelming. Our registered user base is growing by leaps and bounds on a weekly basis. This is evident by the bidding on just the first day of our 2021 Goldin Elite Auction, which nearly doubled our prior high for a single day of bids (exclusive of closing day). To accommodate the desire of collectors around the world to include items on our platform, as well as bidders, we are announcing an expanded auction schedule. Each month will be led off by an exclusive 7-day trading card auction, followed by a traditional card and memorabilia auction. We have compacted our deadlines to allow almost instantaneous placement of your items at auction and we are accepting consignments for all of the below events except the items currently running in the current Goldin Elite.” 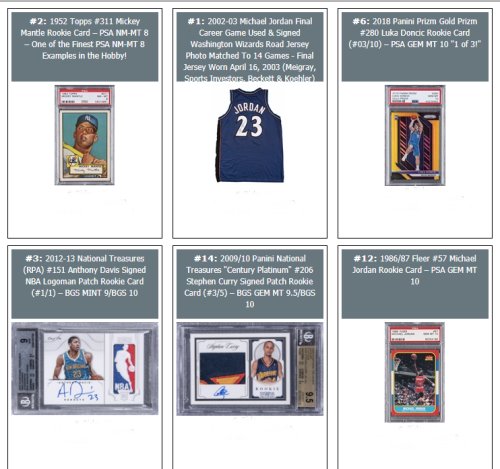