Goldin Auctions capped off 2016 with a record-setting year in which they sold more than $25 million in sports trading cards and collectibles and established numerous industry standards.    Up next for Goldin Auctions will be there Winter Auction scheduled for January 9-28, 2017  at www.GoldinAuctions.com.

Goldin Auctions, which has also been the Official Auction House of the Babe Ruth Museum since 2015, will raise funds and visibility for the Jackie Robinson Foundation and the Jackie Robinson Museum project. It will host an annual Jackie Robinson Foundation Auction, featuring a wide variety of sports, historical and pop-culture memorabilia tied to Robinson, athletes of his generation, Negro Leagues baseball, the Civil Rights Movement and other related figures and topics. The first such event, the 70th anniversary auction, is slated for this spring on Saturday April 15. A 75th anniversary auction and special event is being planned for 2022.

“We look forward to working with Goldin Auctions to help raise funds and awareness for our mission that promotes education, leadership and the humanitarian legacy of Jackie Robinson,” said Ms. Britton. “Goldin Auctions has established itself as one of the industry’s most innovative and successful sports auction houses, and Ken Goldin is a delight to work with and a terrific and generous partner.”

“We are honored to be working with the Jackie Robinson Foundation to help keep alive one of our country’s greatest legacies and to raise funds for the important work the Foundation does in education, including in connection with the new Jackie Robinson Museum in New York City,” said Mr. Goldin. “With more than $10 million in memorabilia sales projected during the term of this partnership, 10% of which we will donate to the JRF, we expect to raise more than $1 million to support the Foundation.” 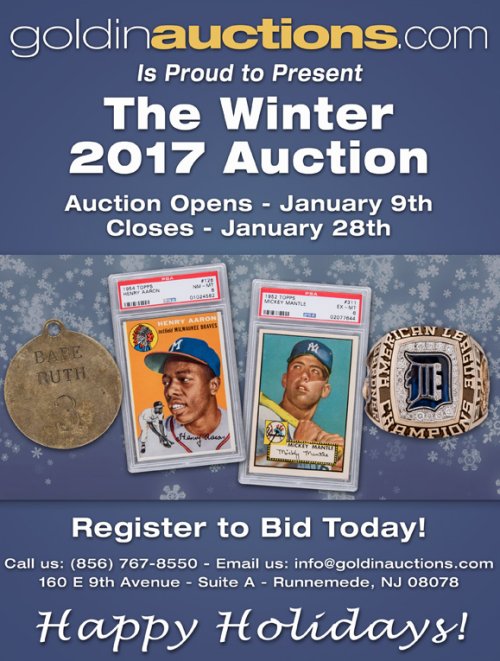