78 lots of unique memorabilia including game used bats, autographed balls, a contract, trading cards and much more from the life and career of the Sultan of Swat are up for auction in the Goldin Auctions Babe Ruth Auction through March 5th at www.GoldinAuctions.com. As part of the company’s long-term exclusive partnership with the Babe Ruth Birthplace Foundation, 5% each winning bid will be donated to the organization.

“Goldin Auctions has brought some of the most valuable and rare Babe Ruth artifacts to auction, and through our partnership with the Babe Ruth Birthplace Foundation we continue to uncover great consignments,” said Ken Goldin, Founder of Goldin Auctions. “Just like our historic Babe Ruth 100th Anniversary Auction we expect the bidding to be competitive among the loyal universe of Ruth collectors.”

The auction features six Ruth autographed baseballs and 12 Yankees team baseballs from 1922-43 signed by Ruth as well as 10 ticket stubs from memorable games in his career. Here’s a look at some of the most valuable and unique Ruth items being offered in the auction. The Babe Ruth Auction closes on March 5. For a free catalog or to register for the auction, visit www.GoldinAuctions.com. 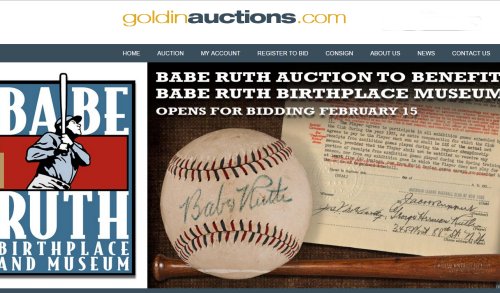 Lot #1 – 1925-26 Ruth Game-Used Hillerich & Bradsby R2 Model Bat – This rare specimen has a grade of PSA/DNA GU 9. The Hillerich & Bradsby R2 model bat measures 36″in length and weights a Ruthian 41oz. and the C5-A center brand is of the type used on bats produced Records in Ruth’s Louisville Slugger archives describe this model as “His #1 Small”. “Small” refers to the smaller knob that was that was preferred by Ruth during the 1925-1926 seasons. The bat was obtained from Ruth by Ted Leaper, in whose family this bat remained until 2013. In the Roaring Twenties Ted Leaper was manager of the Paramount Theater, Paramount Pictures’ Manhattan flagship on Broadway.

Lot #2 – 1933 Babe Ruth NY Yankees Player Contract – The 1932 season was yet another legendary campaign for Ruth as it concluded with the near-mythical “Called Shot” home run in the 1932 World Series after hitting 41 home runs during the season. The Yankees proposed the aging Ruth take a pay cut from $75,000 to $50,000 so Ruth reported to Spring Training with the contract unsigned with every intention of hammering out a deal. Yankees owner Jacob Ruppert laid down an ultimatum: sign for $50,000 by March 29 or he would not be taken north with the team. Ruth gave in, signing for $52,000. The Babe did go on to have a decent year in 1933, but it was the beginning of the end for him in pinstripes as he would play just one more season before being unceremoniously released. The contract bears the original raised seal of the “American League Baseball Club of New York,” and reveals standard compacting folds. Fully and properly executed, it carries the vivid black fountain pen signatures of three Hall of Famers: George Herman Ruth; owner Jacob Ruppert, and manager Joe McCarthy(“Jos. V. McCarthy”) signing as witness. The contract is protected inside a custom-made, embossed leather case that has been crafted to museum-quality specifications. LOA from PSA/DNA (A98579).

Lot #71 – Babe Ruth Conlon Collection Original Artwork by Adam Port – The art is based on a 1924 batting shot made famous in Neal and Constance McCabe’s book Baseball’s Golden Age: The Photographs of Charles M. Conlon. Svelte and strong at the House That He Built, Ruth follows through as his eyes gaze skyward. The 28″ x 38″ portrait is as true-to-life as any we’ve ever seen-and as only Adam Port can achieve. Rendered in acrylic paint and colored pencil, it is signed by the artist and elegantly framed to measure 30″ x 40″.