When the Gavel dropped on the Goldin Auctions October Legends Auction, the total proceeds topped $16 Million, a figure never before that had been eclipsed in the Online Sports Memorabilia Auction Industry from single auction event. Topping the list of most valuable items was the T-206 Honus Wagner card in Lot #1 which sold for $1,426,800 setting a new All-time record for a Honus Wagner T-206 card in the respective grade by PSA. In addition to the record bid price on the famed Honus Wagner, another very iconic basketball rookie card of Michel Jordan has also toppled the record. The red, white and blue 1986 Fleer issue featuring Jordan sold for the price including premium of $124,230, setting a new auction record for this popular card.

Other notable sales were the 1952 Topps Mickey Mantle that sold for a staggering sum of $584,250. A new record for the most expensive Soccer card of All time was also set with a sale of $295,200 on a 1958 Alifabolaget Pele rookie card graded a PSA MINT 9 and a 1986 Fleer Basketball set containing Michael Jordan’s rookie card also set a new record price $224,300. 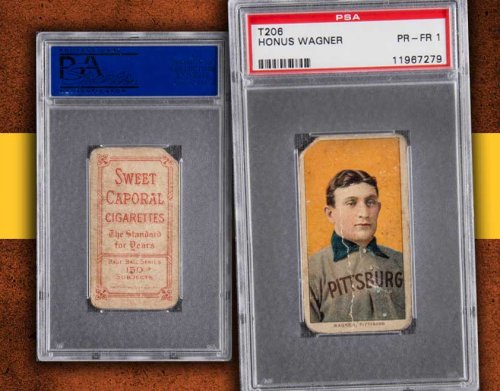 Goldin also explained, “I would like to thank all of our consignors who contributed tremendous product to the auction, and all of our bidders, not only for their support during this auction, but during all of 2020 which has seen us put up an unprecedented run of five consecutive auctions which have each generated in excess of $10 million in sales.” 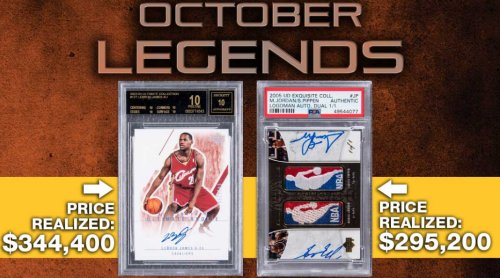 Goldin Auctions is currently seeking consignments for our Holiday Auction being held in December and our next Goldin Elite auction in January. To get into the auction you can consign by emailing an image and description of your items to info@goldinauctions.com.

The Goldin Auctions 2020 October Legends Auction Session 1 also featured the Cal Ripken Jr. personal collection that included game used items and memorabilia from the career of Hall of Famer Cal Ripken, Jr. from his first little league uniform, to his early days as a Baltimore Oriole, to items from his historic consecutive game streak, 3,000th hit, 400th home run, World Series Championship, retirement and more. The collection brought in over $1.2 Million in total revenue and a portion of all his items sold will benefit the Cal Ripken, Sr. Foundation.
The Highlighted sales from the Ripken collection was the Jersey worn by Cal for his final game of his 2632 consecutive game streak that fetched $184,500, the jersey worn by Cal for his Major League Debut sold for $123,000 and the bat used by Ripken in the 1st inning of his record breaking 2131 consecutive game brought in $124,230.

Lot #1: 1909-11 T206 White Border Honus Wagner – PSA PR-FR 1 – The Collecting Hobby’s Most Celebrated Rarity! – SOLD $1,426,800 *New Record – This is one of the very few collectibles on earth for which no explanatory description is required. The mere sight of a T206 Wagner is sufficient to provoke an unbelievably pleasant sensation, unique to each individual, within the emotional core of a baseball enthusiast. Graded PR-FR 1 by PSA, one of just three dozen copies across all levels to merit fully graded, numerical authentication by that company.

Lot #3: 2005/06 UD “Exquisite Collection” Logoman Autographed Patches Dual #DLA-JP Michael Jordan/Scottie Pippen Dual-Signed Logoman Game Used Patch Card (#1/1) – SOLD $295,200 PSA Authentic – Encapsulated and assessed “Authentic” by PSA. Hall of Famers Michael Jordan and Scottie Pippen, this is a commemorative that honors one of the most esteemed pairings in sport, a duo that challenges Ruth/Gehrig or Montana/Rice in terms of prestige and importance.

Lot #4: 2011 Bowman Chrome (Superfractors) #175 Mike Trout Rookie Card (#1/1) – PSA GEM MT 10 – SOLD $221,400 – Presented here is a truly stellar collectible, featuring the Angels star Mike Trout, who is widely regarded as the greatest baseball player of his generation. This card is graded GEM MT 10 by PSA. Trout’s rookie card is one of the most widely pursued debut-year collectibles of our time. The wholly unique, limited-edition piece is serial-numbered “1/1.”

Lot #10: Cal Ripken, Jr. Game Used & Photo Matched Consecutive Game #2632 (All-Time Record) Baltimore Orioles Home Jersey Used 9/19/1998 (Ripken LOA & Sports Investors Authentication) SOLD $184,500 Cal Ripken, Jr. wore this jersey to play in his 2,632nd consecutive game, the final one of his record-setting streak. To say this jersey is a museum-worthy artifact would be an understatement; in fact, it has spent the past 22 years as the cornerstone of an exhibit about Cal in the National Baseball Hall of Fame in Cooperstown, New York.

Lot #73: 1958 Alifabolaget #635 Pele Rookie Card – PSA MINT 9 SOLD $295,200* Highest Priced Soccer Card of All Time – Graded MINT 9 by PSA. National Soccer Hall of Fame and International Football Hall of Fame enshrinee, in a coveted Rookie Card appearance. This is one of just five examples at its tier (with none graded higher) among a total of more than fifty copies recorded in PSA’s census reporting. A truly exceptional, Swedish-issue collectible, this Pelé Rookie Card displays four razor-sharp corners and a clean, pristine surface. Its illustration is a rich, colorful and vibrant portrait of the 17-year-old soccer prodigy.

Lot #99: 1986/87 Fleer #57 Michael Jordan Rookie Card – PSA GEM MT 10 – SOLD $124,230* New Record! – Michael Jordan is seen here in the highest grade acknowledged by PSA, a distinction that less than two percent of all the examples ever submitted are qualified to claim. The offered card is clearly a pack-fresh example, with impeccable centering and superb color.

“Macho” Camacho Collection Goes Up For Auction at Goldin Auctions