A new standard in sports memorabilia is expected to be established in September when The Goldin Auctions Great American Trading Card Auction offers for sale 50 high-value trading cards. The event will be headlined by the famed 1909 T206 White Border Honus Wagner PSA EX 5 (MC) specimen, which is widely known in the hobby industry as The “Jumbo” Wagner. Wagner’s fame as the greatest shortstop in baseball history, the incomparable rarity and exclusivity of the card, and the story behind it combine to make this baseball’s most famous collectible.  A preview of the auction is now open at www.GoldinAuctions.com. Bidding is open from September 12 through October 1.

“Serious collectors understand that every time a card like this is offered for auction, it may be the last time for a long time,” said Ken Goldin, Founder of Goldin Auctions. “The excitement that the auction of a T206 Wagner generates, coupled with the current booming market for high-grade trading cards, creates the perfect storm for establishing a new standard for sports memorabilia. With the tremendous increase in value of key trading cards, and influx of new collectors, the market has been clamoring for a high grade Wagner to come to market. We are pleased to offer one of the three highest graded examples and what many people consider the most desirable.” 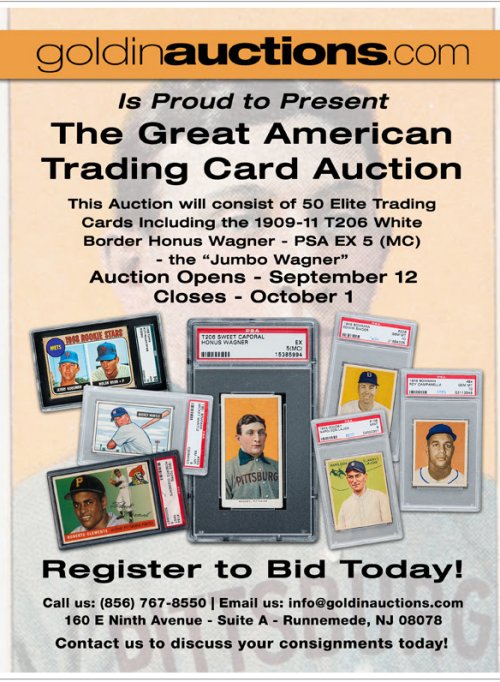 The Great American Trading Card Auction also includes six cards awarded a PSA 10 GEM MT rating, five cards designated as 1 of 1’s and four cards recognized as 1 of 2. Remarkably, 14 of the cards are estimated to sell for more than $100,000 with nine expected to surpass $200,000. Here are a few of the other rare, high-grade cards being offered. For more detailed descriptions, visit www.GoldinAuctions.com.

To preserve the integrity of the auction and protect all bidders and the consignor, bidding on Lot #1 – the “Jumbo Wagner” – requires pre-approval. All interested bidders must contact Goldin Auctions in advance for pre-approval or they will not be authorized to bid. For more information about The Great American Trading Card Auction, contact Goldin Auctions at info@goldinauctions.com or call 856-767-8550.