When the headliners are Mickey Mantle, Michael Jordan, John F. Kennedy and the Beatles, you know it’s a big-time event. That’s the case as the 2016 Goldin Auctions Holiday Auction offers more than 900-lots of sports, history and pop-culture memorabilia from these legendary figures and many more from November 14 through December 3 at www.GoldinAuctions.com.

The most historic item being offered is Lot #2, the handcuffs belonging to Officer Ray Hawkins that were used to arrest Lee Harvey Oswald in the Texas Theater on November 22, 1963. These handcuffs are one of the very few significant JFK-Oswald items that are not in the National Archives. Since the Dallas Police Department made its officers and detectives buy their own handcuffs, Hawkins retained his private property after the assassination. These Smith & Wesson cuffs, bearing the serial number “38468” were originally issued to Officer Hawkins when he joined the Dallas Police Department in 1953. Hawkins used these cuffs throughout his entire career and retained them after he left the force. The handcuffs are accompanied by a signed and notarized affidavit from Ray Hawkins describing his actions on November 22, 1963 and the role these handcuffs played in the capture of Oswald.

As the market for high-grade vintage sports trading cards continues to escalate, it’s no surprise that one of the highest graded 1952 Topps #311 Mickey Mantle Rookie Card PSA NM7 is being offered. This version, (Lot #1) is familiar to collectors as it’s from “The Rosen Find” a trove of 1952 Topps high number cards uncovered in 1986 by hobby legend Alan “Mr. Mint” Rosen. 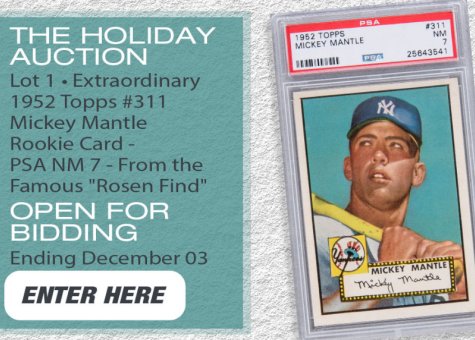