The 2017 Goldin Auctions Legends Auction featuring more than 1,800 lots of unique sports, entertainment and historic memorabilia is in progress at GoldinAuctions.com and concludes on November 11, 2017.

In addition to making hundreds of collectors and consignors happy, the auction will also benefit those effected by Hurricanes this year in Florida, Texas and Puerto Rico. 100% of the sale price for each of the 44-lots of trading cards, game-used memorabilia, autographs and more donated to Goldin Auctions will benefit the American Red Cross.

The Rusty Staub Collection:  18-lots of memorabilia from the 6-time All-Star who played 23 seasons for five different teams including the Colt 45’s/Astros, Expos, Mets, Tigers and Rangers. A fan favorite everywhere he played, Staub was especially beloved in New York, starring for the Mets during his prime from 1972-75 and then becoming one of baseball’s best pinch hitters for the Mets from 1981-85 and a broadcaster after his playing career ended. In all, Staub batted .279 with 2,716 career hits, 292 homers and 1466 RBI.

The most remarkable lot in the collection is Lot #563, a 600+ Staub card collection which feature four autographed copies of his 1963 Topps Colt 45’s rookie card. Other highlights of the collection include his 1985-86 New York Sports Emmy Award for his work on the Mets broadcasts; a LeRoy Nieman signed Rusty Staub original water color painting; and four signed and inscribed photos of him with Presidents Richard Nixon, President George HW Bush, and Ronald and Nancy Reagan. 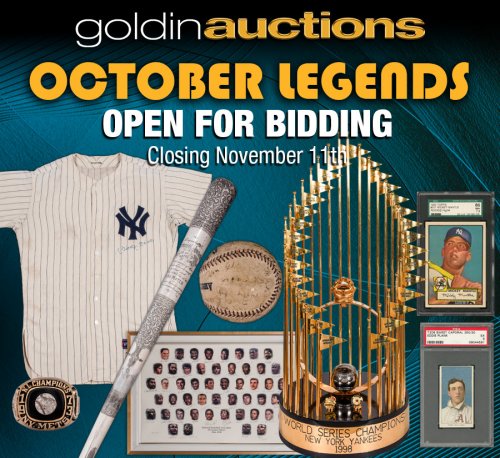 Here’s a look at some of the marquee items up for bid. For a look at the entire auction or to receive a free catalog visit GoldinAuctions.com.

Lot #1 – 1917 Chicago White Sox World Championship Historic Game Ball featuring 25 signatures from players, coaches and umpires including; Joe Jackson, Eddie Collins and the ‘Eight Men Out”. The ball, which was used in the deciding game six of the Fall Classic was signed by the champions two years before the infamous 1919 World Series. Appearing on the sweet spot, in large bold letters, is the signature of the 1917 White Sox manager, Clarence Rowland and his notation “Oct. 15, 1917,” the date on which Chicago won the World Series. Comes with LOA from PSA/DNA for the signatures and MEARS for game use.

Lot #2 – 1898 Cap Anson Silver Presentation Bat – Awarded to Anson by the students at Notre Dame University four months after he retired. Inscribed on the barrel of this sterling silver bat is “Presented to Adrian C. Anson by the Students of Notre Dame University as a testimony of their pride in him as one of the earliest and greatest athletes of their Alma Mater, February twenty second Eighteen Hundred and Ninety Eight”.

Lot #4 – Finest Known Extremely Rare 1915 Babe Ruth & Father Original Type 1 Photograph in their Baltimore Tavern — Described by best-selling sports biographer Jane Leavy as “The only known photograph of father and son,” the approximately 8″ x 10″ crystal-clear image was taken in December 1915 depicting father and son as almost mirror images. They wear matching barkeep outfits, lean one hand on the back bar, stare mirthlessly at the camera.

Lot #6 – 1959 Mickey Mantle Game Used, Signed & Photo Matched Yankees Home Jersey – Comes with authentication from Mears and Sports Investors and LOA from Steve Grad of Beckett Authentication. It has been photo matched by Resolution Photo-matching to an April 12, 1960 image, along with an August 17, 1959 image and a 1960 Topps Mickey Mantle Sport Magazine ’60 ALL-STAR SELECTION card. A LOA from Resolution Photo-matching accompanies this item.

Lot #16 – 1967 Frank Robinson Game Used & Signed Orioles Road Jersey – Robinson has added his signature to the front of the jersey, topping off an already extraordinary Hall of Fame and museum quality piece. This jersey comes with an LOA from Mears for the game use and has been graded an A 6.5. There are also additional LOAs from JSA and PSA/DNA for the signature.

Lot #18 – 1997-98 Michael Jordan Games Used, Signs & Photo Matches Bulls Home Jersey – Worn by MJ on 4/11/98 when he recorded his 5000th career assist versus Orlando. The jersey comes with an LOA from the Chicago Bulls for the game use, Upper Deck for the signature and Resolution Photo-matching for the photo match.

Lot #17 – 1976 Muhammad Ali Fight Worn Robe VS Ken Norton at Yankee Stadium – The robe is a full, calf length white crushed velvet with satin trim. The back features 3-inch tall purple block letters with “MUHAMMAD” arched above “ALI”. The front has two waist pockets with white satin trim on the top edges and a left breast pocket trimmed in white satin with an EVERLAST label bearing the notation “MADE EXPRESSLY FOR MUHAMMAD ALI”. The robe comes with an LOA from noted boxing expert Craig R. Hamilton and WBC Authentication.

Lot #23 – 1991-2003 NY Rangers Hockey Rink from Madison Square Garden – This rink was the one that hosted the Rangers at MSG for more than a decade including their 1994 Stanley Cup Championship season. Members of the 1994 Rangers’ team have signed pieces of the dasher boards including Mark Messier, Brian Leetch, Mike Richter and many others multiple times. The rink is 85′ x 200′, the official NHL standard. The entire group sits in storage awaiting a new home with an owner ready to relive the greatest moment in modern Rangers history. The signatures come with Steiner COAs.

Lots #26-39- The Senate Page Collection – The rare autograph collection, authenticated and encapsulated by PSA/DNA, is being offered in multiple lots with opening bids ranging from $500-$5,000. Rare signatures include Walter Johnson, Frank Selee, Cy Young and other turn-of-the-century figures.

Lot #43 – 1909-11 T206 White Border Eddie Plank PSA EX5 – Among a total of 71 examples recorded in the PSA census reporting, just seven copies have been placed at a higher, unqualified tier.

Lot #545-548 – Tupac Shakur Collection – Four lots of hand-written song lyrics, poems and prison letters from the hip-hop icon including lyrics to “I Ain’t Mad at Ya” and “Az the World Turnz”.

Lots #662-678 – The Casey Stengel Collection – 17 lots from the Hall of Fame manager including game-won pants, shirts, jacket and cap as well as his manager’s contract and other documents from both the Mets and Yankees.