Every summer, collectors from around the world convene at the National Sports Collectors Convention to buy, sell and admire the largest collection of sports memorabilia under one roof. For the third consecutive year, Goldin Auctions will host the event’s official live auction, and fittingly, the contents are impressive.

The 2017 Goldin Auctions Premium Live & Online Summer Auction is in progress with a 90-lot live auction (Lot #1-90) concluding on July 27 in Chicago during The National. A corresponding 1,835-lot online auction at www.GoldinAuctions.com will close on August 5th. Bidding for both events begins on July 3. 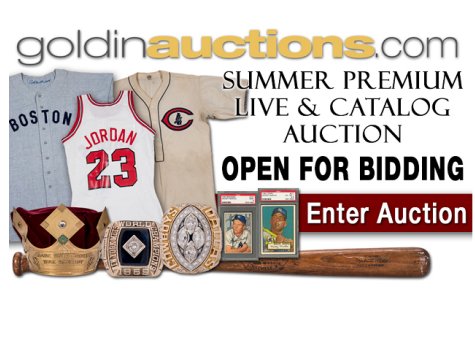 The live auction is headlined by game-used bats from Hall of Famers like Babe Ruth, Mel Ott, Lou Gehrig and Ted Williams; game-worn gear from such greats as Michael Jordan, Hack Wilson and Aaron Rodgers; plus, rare cards, championship rings, trophies and much more. Here’s a look at some of the marquee items.

Lot #25 – 1930 Hack Wilson Game Worn Cubs Jersey & Pants – Worn by the Cubs’ slugger during his famed 56 HR & 191 RBI season. Because of his quick rise and even quicker fall, game used pieces are extremely sought after, making this uniform a real find. There is no number on the back of the jersey but embroidered in black on the bottom outside back tail is “Wilson 3 30”. The pants have been cut and tailored to knee-high length with “Wilson 3 30” embroidered in black along the buttons.

Lot #26 – 1959 Ted Williams Game Worn & Signed Red Sox Jersey – With a Mears grading of A10, this fantastic offered gray flannel button-down Red Sox road jersey was worn by Williams during the 1959 season and may very well be the finest known to exist. A “Tim McAuliffe” manufacturer’s label is sewn onto the bottom left front tail with a “59” patch indicating the year, and “46” patch indicating the size. “TED WILLIAMS” is hand written in faded black marker to the right of the ’59 patch and below the McAuliffe tag. Goldin Auctions previously sold a ’55 Williams jersey graded MEARS A9 for $176,000. Also included is a full letter of authenticity from PSA/DNA for Williams’ signature.

Lot #12 – 1984-85 Michael Jordan Game Used Chicago Bulls Rookie Season Home Jersey – One of the finest examples of a rookie Michael Jordan game used Bulls jersey. It displays considerable game use and presents in a cream white. This impeccable jersey comes with a full LOA from noted Bulls jersey expert Alan Meza, who notes in his LOA that “It is one of the finest Rookie Jordan gamers I’ve ever seen” and a LOA from Mears, who have graded this jersey an A5.

Lot #15 – 1996-97 Michael Jordan Games Used, Signed & Inscribed Bulls Road Jersey – The red 1996-97 Bulls road jersey was worn by MJ during the Bulls 69-13 regular season which ended with a win over Utah in the NBA Finals. Comes with a full and detailed LOA from experts at Mears, who have given this jersey a perfect A10 grade, its highest possible rating. There is also a LOA from the Bulls on behalf of the CharitaBulls charity foundation authenticating the use of this jersey during the 1996-97 season and Jordan’s signature.

Lot #48 – 1965-71 Gale Sayers Game Used & Signed Bears White Jersey – A rare game jersey worn by the legendary running back during the 1965-71 seasons. The jersey shows excellent game use with numerous stains and team repairs. Sayers signed his name in bold black marker on the front beneath the “0”. Comes with a full LOA from Mears, who have graded this jersey a perfect A10.

Lot #54 – 2002 Aaron Rodgers Game Used, Signed & Inscribed Butte Junior College Road Jersey – Before he made his mark at the University of California, Rodgers played one season at Butte Community College in Northern California. This Butte Roadrunners white jersey was worn by Rodgers during that season. The Nike tag is sewn on the bottom front left tail and Rodgers signed his name on the upper left chest and inscribed “BC Pride!” Shows evidence of solid use with numerous marks and abrasions. Comes with a LOA from Butte College AD Craig Rigsbee, authenticating the jersey’s game use and Rodgers’ signature.

Lot #55 – Tom Brady’s Personal Super Bowl XXXIX Patriots Offense Handwritten Notes – This handwritten note sheet recounts the Patriots 24-21 victory over the Eagles in Super Bowl XXXIX. Brady wrote down the result of each offensive play the Patriots ran during their 12 drives (not including final kneel-down). Each play is described in three columns: down and distance; the play; and the Eagles defensive front. Brady meticulously wrote his notes on this sheet in blue pen. At the top of the sheet, he wrote the date, “Feb. 2005”, and his opponent, “Eagles”, in blue marker. It is in good condition, although there is a small water stain on the lower left corner and a smaller stain that near the top that slightly impinges upon the “Feb. 2005” inscription. There appears to be a small blood stain on the right side of the page, on both the front and back sides. Comes with an LOA from JSA.

Lot #80 – 1965 Edward J. Neil Memorial Award Presented to Cassius Clay – Professional boxing’s equivalent of the Heisman Trophy. And, like the Heisman, it’s so highly prized that very few have ever found their way into the collecting community. Includes a wire photograph of the 23-year-old legend at the award banquet holding the plaque. Comes with a full LOA from boxing expert Craig Hamilton of JO Sports, Inc 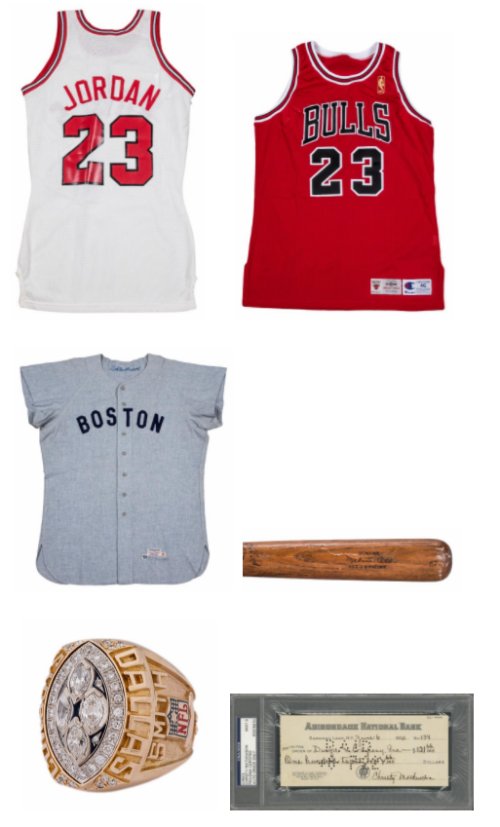