A spectacular collection of memorabilia from basketball’s most decorated player, Kareem Abdul-Jabbar, will headline the Goldin Auctions 2018 October Legends Auction from October 1 to 27, at GoldinAuctions.com.

The unique collection, from the greatest college basketball player of all-time and the NBA’s all-time leading scorer, includes numerous championship rings, game-worn jerseys, the ball he scored to become the NBA’s all-time leading scorer, three UCLA championship nets, historic awards including the inaugural Naismith College Player of the Year Trophy, and even a pair of his signature goggles. 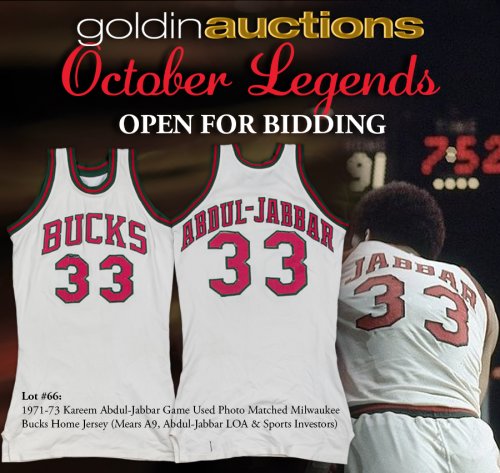 Originally, this Kareem Abdul-Jabbar Milwaukee Bucks home jersey was offered as a 1972-73 season game used jersey. Now, after further examination, we found remnants of “JABBAR” underneath “ABDUL-JABBAR” on the back of the jersey, which further dates this jersey to the 1971-72 season in addition to the 1972-73 season, making this an extraordinary and extremely rare Kareem two-season jersey! Because of this rarity, we sent this jersey to the experts at Mears, who, based on photographic evidence, have agreed that this jersey was in fact used for two seasons, both during the regular season and playoffs and have stated that “a better example from this stage of Jabbar’s career has not entered the hobby.” Kareem changed his name from Lew Alcindor to Kareem Abdul-Jabbar before the start of the 1971-72 season when he converted to Islam. The 1971-72 season was also the first year in which Milwaukee Bucks put names on the backs of their jerseys, however, due to the rules of that time, the NBA would not allow “ABDUL-JABBAR” for Kareem on the back of the jersey, only “JABBAR”. “ABDUL-JABBAR” replaced “JABBAR” on the back of this jersey for the 1972-73 season. This jersey was special enough that the Milwaukee Bucks held on to it before presenting this to Kareem when they retired his number 33 on April 24th, 1993. Mears has graded this jersey a near-perfect A9, only taking off a point for the ripped Rawlings tag and the fraying of the numbers on the front of the jersey. This jersey also comes with a LOA from Kareem Abdul-Jabbar himself and it has been photo matched by Sports Investors to both 1973 and the 1993 retirement ceremony.

“For nearly two decades, Kareem Abdul-Jabbar was the most dominant basketball player in the world, first at UCLA where they changed the rules of the game to try and defend him, and then in Milwaukee and Los Angeles, where he won six MVPs and six NBA championships,” said Ken Goldin, founder of Goldin Auctions. “We have worked with Kareem several times in the past, so it is especially rewarding that he chose Goldin Auctions to bring this remarkable collection of his life’s work to auction.”
The bulk of Abdul-Jabbar’s personal sports memorabilia collection will be offered in the auction, although he has decided to keep a few personal mementos and donate several others to charity. Additionally, much of his proceeds from the auction will be donated to his SkyHook Foundation, whose mission is to give kids a shot that can’t be blocked. 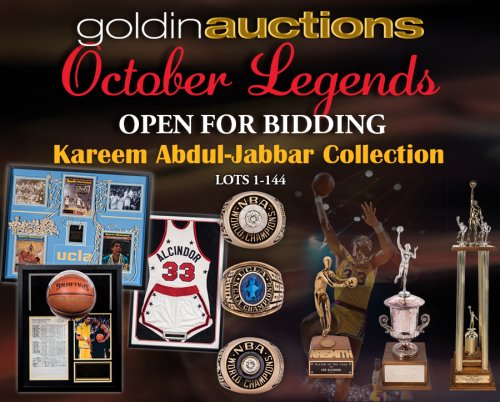 “My sports memorabilia has a history. My history. My life. And, oddly, since my life is still happening and ever-evolving, I am less personally attached to those items than I am to my desire to create new history for myself-and futures for others. Much of the proceeds from my auction will go to support my charity, the Skyhook Foundation, whose mission is to give kids a shot that can’t be blocked,” explained Abdul-Jabbar in an essay he penned on why he is selling the memorabilia. “So, when it comes to choosing between storing a championship ring or trophy in a room or providing kids with an opportunity to change their lives, the choice is pretty simple.”

Goldin Auctions displayed the collection during the Naismith Basketball Hall of Fame induction ceremony and will display the collection in both New York City and Los Angeles between now and the close of the auction. Details on the public displays will be available at GoldinAuctions.com.

Here are a few of the highlights of The Kareem Abdul-Jabbar Collection:

About Kareem Abdul-Jabbar
Kareem Abdul-Jabbar is NBA’s all-time leading scorer, a six-time NBA champion, two-time NBA Finals MVP, 11-time NBA All-Defensive team member, 19-time NBA All-Star and the league’s only six-time MVP. Following a remarkable career at UCLA where he led the Bruins to an 88-2 record and three NCAA championships, he captured his first NBA title with the Bucks in just his second season. He joined the Lakers after six seasons in Milwaukee, leading them to five NBA championships in 14 seasons. He retired in 1989 as the NBA’s all-time leading scorer with 38,387 points and the first player to ever play for 20 seasons.

Throughout his life, Abdul-Jabbar has been one of the most influential and respected black men in America for his stance on social issues. The mission of his Skyhook Foundation is to “Give Kids a Shot That Can’t be Blocked” by bringing educational STEM opportunities to underserved communities through innovative outdoor environmental learning. A New York Times best-selling author, he has written 14 books, including two recent memoirs: Becoming Kareem for young readers, and Coach Wooden and Me, about his lifelong friendship with famed UCLA coach John Wooden. President Barack Obama awarded Abdul-Jabbar the Presidential Medal of Freedom, the nation’s highest civilian honor.