Goldin Auctions 2020 October Legends Auction is now open for bidding features the Cal Ripken Jr. personal collection that includes the sale of some of the most prized possessions from the personal collection of Baltimore Orioles Baseball Hall of Famer. The two-session auction will be open until October 31st and November 1st and will also include one of the world’s rarest and most distinguished paper heirlooms – a 1909-11 T-206 Honus Wagner card that is expected to handily eclipse $1 million.

The Cal Ripken, Jr. collection features game used items and memorabilia from the incredible and unparalleled career of Cal Ripken, Jr. from his first little league uniform, to his early days as an Oriole, to items from his historic consecutive game streak, 3,000th hit, 400th home run, World Series Championship, retirement and more. A portion of all his items sold will benefit the Cal Ripken, Sr. Foundation.

“It is an honor to get the opportunity to work once again with Cal Ripken, Jr.,” said Goldin Auctions Founder and CEO Ken Goldin. “He is one of the most loved and important icons in American sports history and his on and off the field accomplishments are second to none. This collection is one of the most significantly important collections ever to come to auction of a modern baseball player.”

Cal Ripken, Jr. states: “Over the last year I have had the chance to explore my collection and it amazed me how many unique items I was able to compile throughout my career. With the celebration of the 25th anniversary of 2131 still fresh in my mind, I thought this would be a great time to share some of them with other collectors and lovers of baseball. It will also raise funds for our work with kids under the Foundation named for my Dad.”

T-206 Wagner cards seldom surface, appearing once every few years at best, and each one’s discovery constitutes a newsworthy occasion. The item’s iconic design features a portrait of Baseball Hall of Famer Honus Wagner on the front, with his image revealed against a bold orange, contrasting background. The reverse carries an advertisement for “Sweet Caporal” cigarettes, a well-known brand at the time of the card’s production. Wagner’s likeness was removed from production early in the card promotion’s run, and is consequently a great rarity now, more than a century later. Barely 50 copies have been confirmed to exist and just 33 examples have been professionally graded or validated as authentic by PSA. 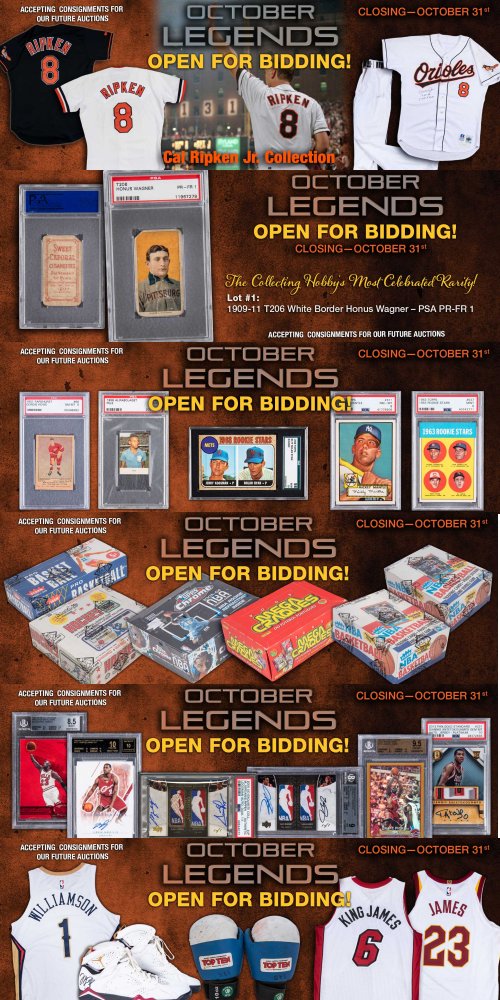 “Although news accounts of our company’s record-breaking, seven-figure prices realized for modern cards now occur on a monthly, or even weekly basis, our success in the vintage field remains as impressive as ever,” Goldin states. “Our unmatched expertise in all cards, old and new, along with the hobby’s best marketing and promotional capabilities, ensures the very best results.”

The 2020 October Legends auction features over 1900 lots of high-end cards and memorabilia and is expected to be the highest revenue producing auction in Goldin Auctions history. There are several collections in addition to the Cal Ripken, Jr that include memorabilia from the Yankees championships, Floyd Mayweather, Jr., Bronko Nagurski, Nick Anderson and items from Mickey Mantle’s childhood.