Goldin Auctions once again set a host of new records as its Goldin Auctions October Legends event generated more than $2.65 million in sales from nearly 1,300 lots of sports, entertainment and historic memorabilia. Not surprisingly, one of the baseball card industry’s most exquisite card collections topped that charts as the 133-card 1939 Play Ball PSA-graded set, assembled by famed collector Jeffrey Gitomer and consigned in partnership with Steiner Sports, sold for a record price of $202,826.

Other record-setting items included a 1959-60 Sandy Koufax game-used baseball glove, which sold for $107,995 and the finest Jimmy Foxx autographed baseball selling for $59,403. Two additional Koufax items also far exceeded pre-auction estimates as a pair of 1964 Koufax game-worn pants sold for $32,410 and single-signed Koufax baseball from his 1963 no-hitter sold for $16,626. For a look at all of the items, visit www.goldinauctions.com.

‘With an astounding 8,500 bids, this was by far our most active auction as more bidders participated than ever before,” said Ken Goldin, Founder of Goldin Auctions. “With 20 items selling for in excess of $30,000 there was more bidder engagement in this auction than any other auction I have ever been associated with. We congratulate all of the winning bidders and thank the consigners for choosing Goldin Auctions to offer their historic artifacts.”

Goldin Auctions is currently seeking consignments for its Winter Auction scheduled to begin in January, 2014. For more information on consignments, visit www.goldinauctions.com. 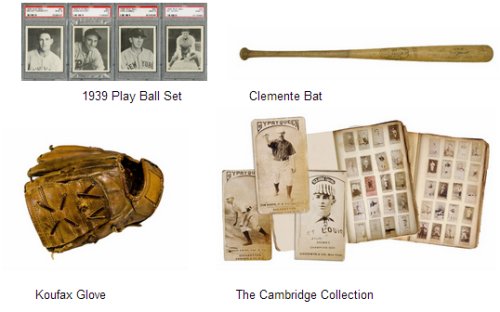 In all, the Goldin Auctions October Legends event featured more than 400 game used items, 40 championship rings and awards, dozens of historical sports documents and hundreds of lots of rare cards. Some of the other highlights included:

About Goldin Auctions
Sports memorabilia impresario Ken Goldin has sold more than $600 million in memorabilia from many of the biggest names in sports, history and pop culture and was the pioneer of using the medium of television to sell sports memorabilia. Earlier this year, Goldin Auctions sold a Honus Wagner T206 card for a public sale record $2.1 million. Goldin Auctions strives to break new ground and offer collectors the best in collectible treasures up for auction in the marketplace. All game worn or autographed items come with team, player, league or additional LOA from industry leading authenticators; and collectors can bid with confidence that their proxy/ceiling bids remain confidential. For more information, visit www.goldinauctions.com.