Goldin Auctions October Legends & Naismith BHOF Auction is now in progress. Bid view and register for the October Legends Auction through October 19 at GoldinAuctions.com. The auction is highlighted by: 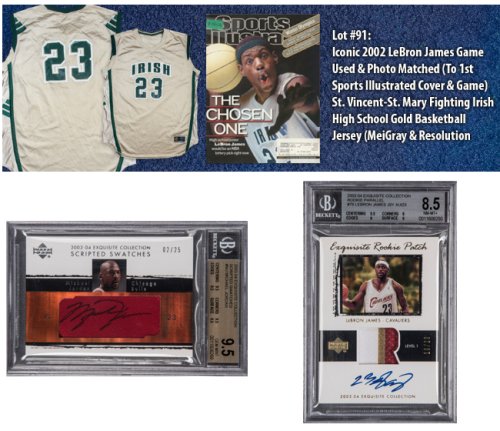 The St. Vincent-St. Mary Gold Fighting Irish jersey was worn by James for his photo shoot with Sports Illustrated on February 3, 2002 and then later that night in a dominant 74 – 49 victory against the Archbishop Hoban Knights in which he posted 32 points and 7 rebounds. It was a typical performance for the junior who was averaging 30.4 points, 9.7 rebounds and 5.9 assists.

The gold mesh jersey has “IRISH” arched above LeBron’s number “23” in green and white. An XXL Onsports label is sewn in the lower left front tail and his number “23” is repeated on the back. The jersey shows good toning overall with some scuffing and perspiration stains as would be expected on the gamer. Comes with LOAs from The MeiGray Group and Resolution Photomatching for the game use and photo match. Additionally, the jersey, worn by LeBron for most of his junior season, was given by LeBron to our consignor and his family. A detailed letter from our consignor who attended St. Vincent-St. Mary’s accompanies the jersey.

“Few players transcend their sport and few collectibles transcend the industry,” said Ken Goldin Founder of Goldin Auctions. “When you combine those two elements into one item records are broken and that is what we fully expect with this historic high school jersey of the world’s most recognizable athlete of this generation.”

Thirty (30) individually graded cards from the extremely sought after 2003/04 Upper Deck “Exquisite Collection” featuring autographed rookie patch cards and special limited editions from the likes of LeBron James, Michael Jordan and Dwyane Wade are up for bids in the Goldin Auctions 2019 October Legends Auction from September 23 through October 19 at GoldinAuctions.com.

One of the collection’s highlights is the Rookie Patch Parallel #78 LeBron James card (#16/23) graded BGS NM-MT+ 8.5/BGS 10. An exceptional rookie specimen of the games biggest star, this card would the prize of any number of the world’s premier sports card collections. In all, there are four 2003/04 James and four Jordan Exquisite cards in the auction.

The eye catching “Scripted Swatches” MJ Signed card (#02/25) graded a TRUE Gem Mint BGS 9.5/BGS 9, provides an ultra-high end “Exquisite Collections” exemplar of the player many characterize as “The Greatest of All-Time.” Various other serial numbered autographed patch cards, special editions, and highly desirable base cards of NBA legends will be available for viewing when the auction preview opens on September 22 at GoldinAuctions.com

“We have proven to be the hobby’s number one auction house for extremely rare and valuable modern cards,” said Ken Goldin Founder of Goldin Auctions. “This collection of 2003/04 Exquisite cards may be our best yet and will surely continue to set records and keep the momentum going here at Goldin Auctions.”

A diverse collection of memorabilia from former Yankees All-Star Willie Randolph including; his 1996, ’98 and ’99 World Series trophies, his 1981 World Series game used glove, 1981 home jersey, and a bat belonging to him used by Thurman Munson in 1976 highlights the auction.

Known as a great teammate, it’s not surprising that the 80-lot collection also includes a host of items from Yankees players who played with or for him during his career including a: 1996-97 Derek Jeter game-used glove; 1982-84 Dave Winfield game-used glove; 1985 Reggie Jackson game-used bat; 1990’s Mariano Rivera game used glove and much more. The complete collection will be available for preview on September 22 at GoldinAuctions.com.

“Willie Randolph has had quite the career both as a player where he recorded more than 2,200 career hits and was a six-time All-Star and also as a coach and manager for 15-seasons,” said Ken Goldin Founder of Goldin Auctions. “In addition to his own items, we have a number of unique treasures acquired from teammates throughout his journey that add to this remarkable snapshot of baseball history.”

The Mickey Mantle card that took the industry by storm last summer, known as the most valuable vintage “pull” to date, is up for bids in the Goldin Auctions 2019 October Legends Auction now through October 19th at GoldinAuctions.com.

At the 2018 National Sports Collectors Convention in Cleveland, Ohio – in full view of the collecting community, a nationwide television audience and the general public – the now-famous piece was pulled directly from an unopened 1955 Bowman pack. The card hadn’t seen daylight in more than sixty years, and it represents the rare collectible that couldn’t possibly have been subjected to any sort of touch-ups or alteration. Directly from cello pack to PSA holder, there are no questions about the authenticity, value, or beauty of this card. 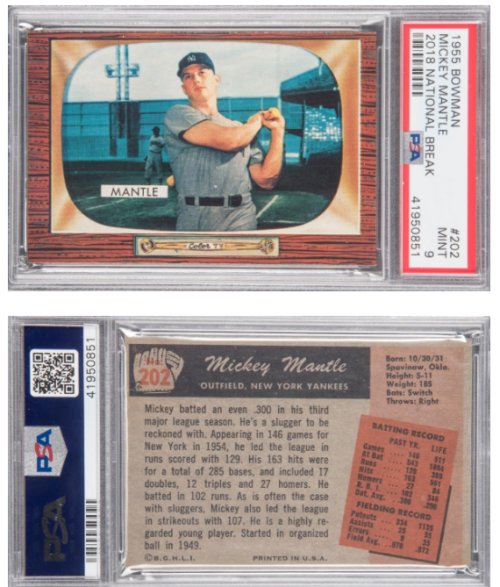 “Being a collector myself for nearly 50 years, I can’t watch the video of ‘The Break’ without getting goose bumps.” Said Ken Goldin, Founder of Goldin Auctions. “We’ve all known the thrill from an early age of breaking open a pack and seeing a card of your hero, all these years later it is very cool to see the industry moving into this direction and it’s a blast to have Goldin Auctions involved. This is a card that represents a simpler time where opening a pack of baseball cards had endless possibilities, like landing a Mint Mickey Mantle.”

There hasn’t been bigger name to hit the basketball seen since LeBron James as Zion Williamson. Various game used high school jerseys, warm ups, and sneakers of the games next phenom are currently up for bids in the Goldin Auctions 2019 October Legends Auction now through October 19th at GoldinAuctions.com.

The Under Armour Elite 24 game and slam dunk contest in Brooklyn was where Zion first burst onto the scene in 2016. The high flying dunker stole the show in the contest and went a perfect 10-for-10 from the field on his way to 23 points, six rebounds in the game on his way to hoisting the co-MVP hardware. The sleek electric green Under Armour sneakers that feature the e24 in black and pink lettering worn that day can now be yours! Also available is the 2017 Adidas Nations Tournament jersey Zion wore which is the EARLIEST known Williamson photo matched jersey in existence. Add to that a Spartanburg Day School uniform and Team USA jersey and you have quite a collection of the earliest game used memorabilia available of the NBA’s next big star. 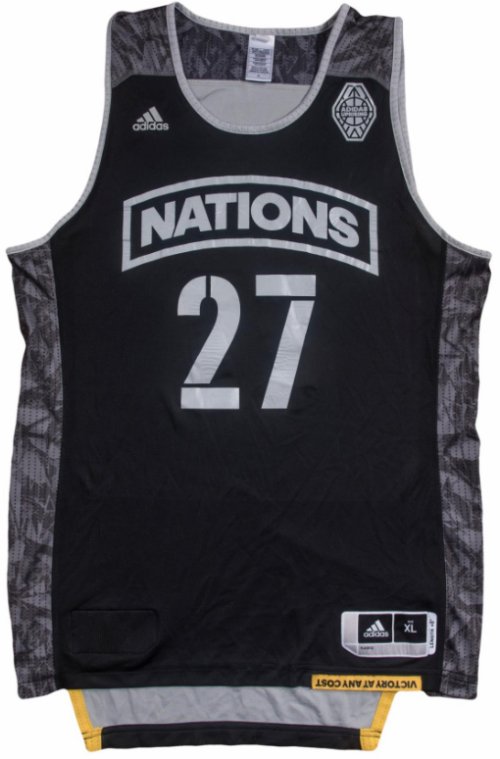 “Every year players come into pro sports that will be all-stars and champions.” Said Ken Goldin, Founder of Goldin Auctions. “But it is only once in a generation that a player comes out with as much hype and upside of a Zion Williamson. Investing early in these types of players is the only way get your hands on game used items like this.”

The collection features 118 baseball relics representing each era dating back to pre-World War I. Connie Mack’s A’s, Jackie Robinson’s Dodgers, and of course Yankees team signed baseballs from the eras of Ruth through Jeter are available. 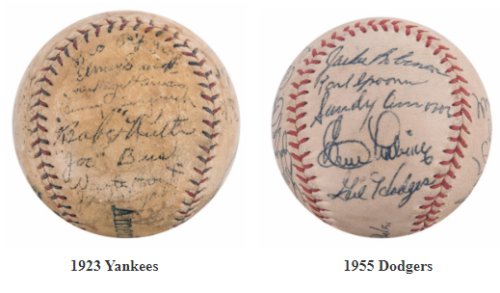 An exquisite 1923 New York Yankees baseball from their FIRST World Championship with a bold Babe Ruth signature along with Huggins, Hoyt, and Pipp leads way. Subsequent World Series balls from 1927, 1928, and 1932 Yankees teams also feature Ruth in addition to the likes of Dickey, Lazzeri, Collins, and of course, Lou Gehrig. Also available is a 1913 Philadelphia A’s signed baseball, one the earliest known team signed balls with Eddie Plank. A host of baseball Hall of Famers and Legends such as DiMaggio, Foxx, Mantle, Munson, Clemente, Koufax, Musial, Maris, Killebrew, Mays, and Aaron can also be found in the collection.

The complete collection can be viewed HERE.

The time, effort, and passion that must have gone into putting this collection together is extraordinary.” Said Ken Goldin, Founder of Goldin Auctions. “Championships are what it’s all about at the end of the day and it’s why we all have a rooting interest in sports, it’s an honor to be able to present a star-studded collection centered around that goal to the world.”

Sports memorabilia impresario Ken Goldin has sold more than $700 million in memorabilia from many of the biggest names in sports, history and pop culture and was the pioneer of using the medium of television to sell sports memorabilia. Over the past few years, Goldin Auctions sold a Honus Wagner T206 card for a public sale record $3.12 million, Babe Ruth’s 1918 contract for a record $1.02 million, the Mike Piazza Post-9/11 home run jersey for $365,000, and the 1979-80 Wayne Gretzky PSA GEM MT 10 rookie card for a record $465,000. Goldin Auctions strives to break new ground and offer collectors the best in collectible treasures up for auction in the marketplace. Goldin Auctions is the official auction partner of the Naismith Memorial Basketball Hall of Fame, the Jackie Robinson Foundation and the Babe Ruth Birthplace and Museum. For more information, visit goldinauctions.com.