A new to the hobby find of more than one hundred, 1910-11 M116 Sporting News Life trading cards recently discovered by a family in the Midwest will hit the auction block for the first time ever in the Goldin Auctions 2015 Opening Day Auction this April at www.GoldinAuctions.com.

The elusive M116 issue features the finest baseball players from the early 1900’s as chosen by the editors of the popular sports periodical Sporting Life. The approximately 1.5″ x  2.75″ collectible cards were originally offered to fans through the mail in as 24 different, 12-card series. Universally regarded as classic depictions from the game’s pre-War period, the card images are from noted photographer Carl Horner, best known for shooting the T206 “white border” cards. The colorful M116 cards are noted for their strong eye appeal, abundant Hall of Fame and superstar roster, and comprehensive player selection.

The collection of cards which encompasses nearly half of the 288-card set came to Goldin Auctions from a family in the Midwest who, while going through their grandfather’s holdings earlier this year, came across this well-preserved collection of 1910-11 M116 Sporting Life baseball cards. These collectibles had remained in their original state for more than a century, still neatly packed in their envelopes. Upon taking possession of the collection, Goldin Auctions had the cards graded by SGC and the results were spectacular as many of the cards were the highest ever graded. 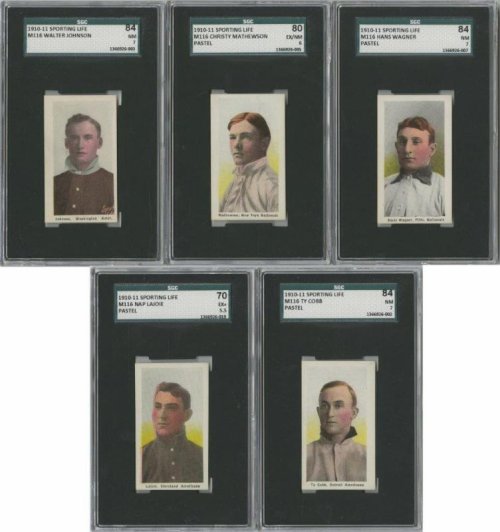 “We are proud to be able to offer this amazing, fresh-to-the-hobby find to the collecting public,” said Ken Goldin, Founder of Goldin Auctions. “This type of find excites collectors who get to bid upon something new as well as the general public who never get tired of hearing the story of buried treasure.”