A treasure trove of memorabilia from some of the biggest names in sports, entertainment, politics and American history is currently up for bids as the Goldin Auctions 2015 Winter Auction opened today at www.GoldinAuctions.com. The 1,400+ lot memorabilia auction will close on Saturday, February 7th. For more information or to receive a free auction catalog, visit www.GoldinAuctions.com.

“This is undoubtedly our most eclectic auction we have ever held and as a result we believe the wide array of memorabilia from sports, entertainment, pop culture and historical figures will expose these items to many more collectors,” said Ken Goldin, Founder of Goldin Auctions.

Here’s a look at some of the highlights of the Goldin Auctions 2015 Winter Auction:

Lot #1 – 1920 Chicago White Sox Signed Baseball – featuring 20 player signatures including six of the eight players named in the scandal. Joe Jackson’s rare signature appears on the sweet spot and is flanked by the likes of Buck Weaver, Eddie Cicotte, Lefty Williams, Swede Risberg and Hall of Famer Eddie Collins. The Ban Johnson Reach Official American League ball has a rich amber tone due to a coat of shellac. “White Sox – 1920” is hand written on one of the panels. The signatures are in bold black fountain pen and grade from 4/10 to 6/10. Full Letter of Authenticity from PSA/DNA and JSA.

Lot #2 – Eddie Cicotte 1919 Payroll Check signed by team owner Charles Comiskey on the front and Cicotte on the back. The White Sox patriarch has signed the lower right corner in his imperial script and the knuckleballer himself has endorsed the reverse. The check has been encapsulated and graded a NM-MT 8 by PSA/DNA.

Lot #4 – Al Pacino’s 1969 Tony Award for the Broadway show “Does a Tiger Wear a Necktie?” Gifted by the actor to Martin Bregman – his first manager and the man who discovered him. The Tony Award is inscribed “Al Pacino Actor-Dramatic Featured or Supporting “Does a Tiger Wear a Necktie?” For Distinguished Achievement in Theatre 1969.” Tony Awards rarely come up for auction due to their coveted nature. Since 1997 Tony Award recipients are required to first offer their awards back to the organization at a minimal price before they are offered for sale elsewhere. Pacino’s 1973 award is not covered by this rule. LOA from Bregman.

Lot #5 – Al Pacino’s 1973 Golden Globe Award for his Best Actor performance in “Serpico” It was Bregman who approached writer Peter Maas and suggested a movie be made from his biography of NYPD hero cop Frank Serpico. Bregman knew the lead character was the perfect role for Pacino. “Serpico” became one of the biggest hits of 1973 and the role that effectively launched Pacino’s career. Golden Globe Awards, of which there are fewer categories, rarely appear for auction. Modern recipients are first required to offer their award to the organization before they are offered for sale elsewhere. Pacino’s 1973 award is not covered by this rule. LOA from Bregman.

Lot #6 – 1942 Joe DiMaggio Game Worn & Signed Yankee Flannel Home Jersey – Authenticated by MEARS as one worn by DiMaggio during the 1942 season. Although it is rare to successfully photo match a jersey that is 70 years old due to the poor quality of photography available, MEARS did find 1942-dated photographs of the Yankee Clipper and established that he wore two different home jerseys that summer, noted as “Jersey #1” and “Jersey #2”. The buttons are deemed to be the original ones and are still firmly affixed to the jersey. The Spalding label is sewn inside the collar along with a size “44” strip tag. “Joe DiMaggio” is chain stitched in black on a white strip tag sewn below the size. A faded “Joe DiMaggio” signature is just below that. The left sleeve features a patriotic shield patch with three stars on a navy blue field above the word “HEALTH”. This patch was worn during the 1942 season by all players as part of the nation-wide “Hale America” program to promote physical fitness. To further date the jersey, the year “42” is chain stitched in navy blue on the inside rear tail of the jersey.

Lot #9 – 1999 Jimmy Page Concert Used 1959 Gibson Les Paul Prototype 1 of only 3 made – One of the most iconic guitars in rock history is Jimmy Page’s “Number One” – his 1959 Gibson tobacco sunburst custom Les Paul. Bought from legendary Eagles guitarist Joe Walsh in 1969, Page’s ’59 Les Paul remained his go-to axe for decades and as a result Page concert used guitars are very rare. In 1998 Page commissioned Gibson’s Custom Shop in Nashville to create three exact replicas of it. Page used the replica in the fall of 1999 for a tour with The Black Crows. LOA from Jimmy Archey, Executive at Gibson.

Lot #10 – Samuel Colt’s 1936-39 Patent Draft Documents – This historical archive includes three of Samuel Colt’s patent drafts sent to Commissioner of Patents Henry L. Ellsworth. Written on watermarked laid paper, each is folded in half to 8″ x 13″. All three are signed by Colt and address improvements to his original 1836 revolver patent. Displayed in a custom made 11″ x 14″ x 1 Â¼ ” leather bound presentation case, complete with an inlaid gold-stamped illustration of a smoking 1836 Patterson Colt. Comes with LOAs from PSA/DNA and University Archives signed by leading historical autograph expert John Reznikoff

Lot #11 – 1965 Mickey Mantle Game Used Bat -Prior to leaving his position as Yankees batboy in 1965 Daniel Noe asked the Mick for a souvenir prior to the July 27-29, 1965 home stand against Detroit. Mantle gave to Noe this Hillerich & Bradsby model M110 made to Mantle’s specs (32oz and 36″ length). It exhibits heavy game use and deep stitch marks and checking. MEARS graded A9.5. Letter of Authenticity 1B05374 from PSA/DNA. Letter of Provenance from Daniel Noe.

Lot #13 – Mike Trout Game Worn & Signed Millville H.S. Jersey — This Millville Thunderbolts jersey was worn by the 17 year-old phenom during his senior year (’09). Trout has signed the number in white ink adding “H/S Game Used”. The jersey shows good game use with some loose threads, pulls in the fabric and very light staining. MEARS has awarded it their highest grade of A10. The jersey comes with a signed LOA from Trout along with a photograph of the slugger posing with this signed jersey.

Lots #53-61 – The Oscar Taveras Collection – A long-time Cardinals fan who was building a memorabilia collection of the team’s top prospect, Oscar Taveras, has consigned the nine items he acquired just days before Taveras’ death. He has made arrangements to donate his proceeds from the auction to Taveras’ family. The items include a pair of Taveras’ minor league championships rings; his first hit/HR baseball; the glove and cleats he wore in his first MLB game; plus a pair of bats, signed batting gloves and a post-season jersey and more.

Lot #1148 – First Pen Used by LBJ to Sign the Civil Rights Act – After a lengthy Senate filibuster President Johnson signed the bill into law on July 2, 1964 with Dr. King and many other Civil Rights Leaders in attendance. Johnson used a number of pens to sign this broad sweeping legislation. The first Lucite pen he used to sign the bill on that historic day, is presented here in a handsome 17″ x 17″ cherry wood shadow box display including a 7 Â½” x 9″ black and white photo of Johnson signing the bill with a mass of pens in front of him and Dr. Martin Luther King standing right behind him while other members of Johnson’s cabinet, congressmen, senators and Civil Rights leaders look on. The 6 Â¼ -inch long clear Lucite fountain pen is embossed with “The President -The White House” on its stem. On a 1″ x 3″ name plate just below the pen with the following engraving: “One of the pens used by the President to sign the Civil Rights Act on July 2, 1964 an act that formally ended segregation.” Johnson insisted that this particular pen be handed to Speaker of the House of Representatives John McCormack, who also signed the bill before the act became a law. This pen was purchased by the consigner directly from Speaker McCormack’s estate. Also included in this historic lot is a pair of relative and pertinent books from Speaker McCormack’s personal library: “The Vantage Point; Perspectives of the Presidency 1963-1969,” written by Lyndon Baines Johnson signed by Johnson with the inscription: “To Harriet and John McCormack Bold and great-humble and kind – Lovers of their country, church and friends-and they served them all faithfully & well with affection-Lyndon Johnson.” The second book: “American Roulette; The History and Dilemma of the Vice Presidency,” By Donald Young inscribed to Speaker McCormack by Huber Humphrey: “To My friend John W. McCormack-a great American- a powerful and just speaker- with admiration-Hubert H Humphrey Dec. 16, 1965 Merry Christmas”. Pair of books comes with PSA/DNA LOA.

Lot #1150 – James Dean Signed 5th Grade Notebook – Presented is a unique James dean artifact that includes twelve signatures in various forms. This three-ring binder was used by Dean in the course of his fifth grade education, circa 1941. The sixteen pages of notebook paper still in the notebook include history, geography, spelling, and math homework — as well as a few doodles — plus four loose pages, one of which features eleven practice signatures by “Jimmie” Dean; (6) Jimmie Dean (2 apparently written left-handed), twice signed “Jimmie” crossing each other, once signed “Jimmie” and two signed just Jim. The most stunning signature is on the inside back cover. LOA from University Archives signed by leading historical autograph expert John Reznikoff.

Lot #1154- Monica Lewinsky Scandal Archive – These items being offered in include: a hand written birthday letter on White House stationary (with usual autopen signature) Lewinsky had President Clinton write to her other lover Andrew Bleiler. There is also an auto-pen signed photo of Bill and Hillary Clinton to the Bleiler’s and one of the President himself by auto-pen. In all, there are eight personalized hand written and signed cards from Lewinsky, some with photographs. Also includes four copies of the 1995 “Holidays at the White House” program plus a selection of souvenirs Lewinsky sent to the Bleiler’s; three boxes of White House branded M&M’s, Whitman’s Chocolates and a Presidential match book. Also includes a selection of Ms. Lewinsky’s wardrobe; four jackets, one pair of wool slacks, a green silk shirt and an alluring black sheer slip which Lewinsky gave to Kate Bleiler. LOA from Kate Nason (Bleiler)

Lot #1156 – Frank Sinatra “Clarence Doolittle” Navy Sailor’s Uniforms from “Anchors Aweigh” -Among Sinatra’s early film credits, “Anchors Aweigh” is a whimsical musical co-starring Gene Kelly that won the 1945 Academy Award for Best Music, Scoring of a Motion Picture. Sinatra and Kelly play sweet sentimental sailors during World War II. This lot offers Sinatra’s Navy Sailor’s uniform and cap. The Dark Blue wool navy suit contains a faux two-star medal on the left breast of the long sleeve shirt top with three white-stripes piping around the collar and shirt cuffs and a loose black satin sash. Sinatra’s name is handwritten on a Metro-Goldwyn-Mayer strip tag label on the shirt’s interior waist band. A similar label is sewn into the waistband of the lace-up pants and contains a handwritten “31.” Dirty white cotton sailor’s cap has size “7 3/8” and “Sinatra” written in black marker on the inside. The lot comes with Debbie Reynolds Auction LOA signed by Debbie Reynolds.

Lot #1159 – Al Pacino’s 18k Gold Rolex Watch Inscribed to Bregman -As a token of their unique friendship, Pacino presented Bregman with this Rolex 18k Yellow Gold Oyster perpetual Day-Date President watch. According to Bregman, he was given this watch as a token of appreciation for referring him to his role as Michael Corleone in ‘The Godfather’ as well as overall career guidance and mentoring. To personalize this spectacular gift, Pacino had the back engraved with “FOR MR. B WITH LOVE MR. P”. The watch is in excellent working order and the inscription is clear and visible. The watch comes with its grey suede storage case. LOA from Bregman. 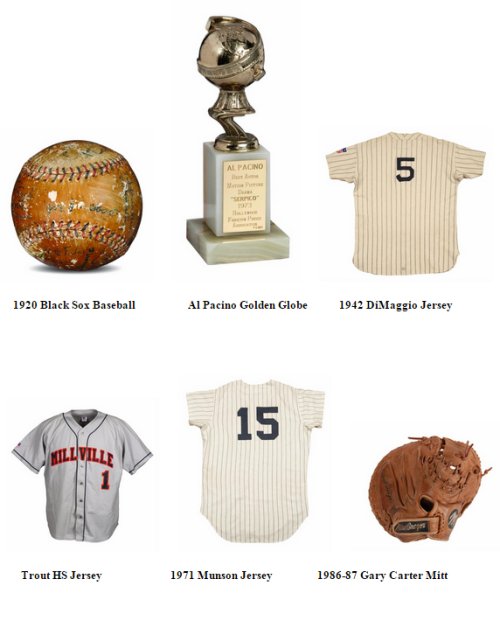