Sports fans need to wait four years for their favorite Olympic events to return, but when it comes to Olympic memorabilia, Goldin Auctions offers a variety of rare and historic items in every auction. That is once again the case as the Goldin Auctions October Legends Auction presents the 1894 original proposal for the first modern Olympic Games written by Frenchman Baron Pierre de Coubertin. This historic document, plus another dozen Olympic-related items are up for bids through October 29, at www.GoldinAuctions.com.

“The opportunity to own the original document that was the impetus for the Olympic Games is a rare one and we are thrilled to offer this museum-quality document for sale for the first time ever,” said Ken Goldin, Founder of Goldin Auctions. “Whether it’s a private collector or museum, this item can be the centerpiece of any high-end Olympic collection.”

The most historic item in the auction is (Lot #3) the Hand-Written Proposal for the Modern Olympic Games written by Frenchman Baron Pierre de Coubertin. The museum-quality document, which has been authenticated by PSA/DNA became the blueprint for the modern Olympic Games. Though the Baron envisioned the first games to be held in Paris in 1900, his proposal caught the imagination of the public and the modern Olympics were launched four years earlier than planned in Athens in 1896. Measuring approximately 8″ x 10″, this folded double-sided document was handwritten and signed by de Coubertin and dated 30 January 1894. A grey embossed “Comite International Olympique 1894” stamp has been affixed to the lower portion of the last page.

Collectors can also choose from a host of other Olympic-related items including:

Lot #512 – 1992 Olympic Gold Medal for Baseball from Cuba’s Victor Mesa – This rare gold medal comes with a full LOA from Livan Hernandez, who in his LOA states that “this Victor Mesa 1992 Olympics Gold Medal in Baseball was acquired by me directly from my friend Victor Mesa and it is free of any liens or encumbrances.”

Lot #1358 – 2000 Ray Allen USA Olympic Jersey – The future Hall of Famer wore this white Champion mesh size 46 pullover jersey during the Olympics in Sydney, Australia. Allen has also signed his name in black marker on the middle of the back “2” of his “12” and inscribed “12”. This jersey shows light game use with some minor toning in some spots and comes with a LOA from PSA/DNA (AA07622) for his signature and a full LOA from noted game used expert Dave Miedema.

Lot #1421 – 1984 US Olympic Team Summer Games Blazer with Olympic Boxing Pin Attributed To Evander Holyfield – The red blazer was worn by the former heavyweight champ and U.S. Olympian during the 1984 Summer Olympics. The left breast pocket features a “1984 OLYMPIC TEAM LOS ANGELES” patch. Two gold buttons with the Los Angeles Olympics logo are on the front with three small buttons with the same logo on each sleeve. A pin that reads “WORLD CLASS BOXER” on a red, white, and blue ribbon is on the left lapel. The inner lining has a “MADE EXCLUSIVELY FOR THE 1984 OLYMPIC TEAM BY LEVI STRAUSS & CO.” tag sewn on the inner pocket.

Lot #527 – 1964 Bill Christian Innsbruck Winter Olympics Participation Medal – Two sets of brothers took the ice for Team USA in Austria-David and Herb Brooks, and Roger and Bill Christian. The latter were, of course, the heroes of the epic 1960 Olympics, as Billy scored the game-tying and game-winning goals against the USSR, with an assist from Roger. Bill Christian’s bronze participation medal, presented here, hails from the 1964 Innsbruck Games. It measures 2 Â½ inches in diameter and displays an EX/MT appearance overall with minor wear. This medal is accompanied by Bill Christian’s signed 2016 LOA. His son, Dave, was a member of the historic 1980 Miracle on Ice team. 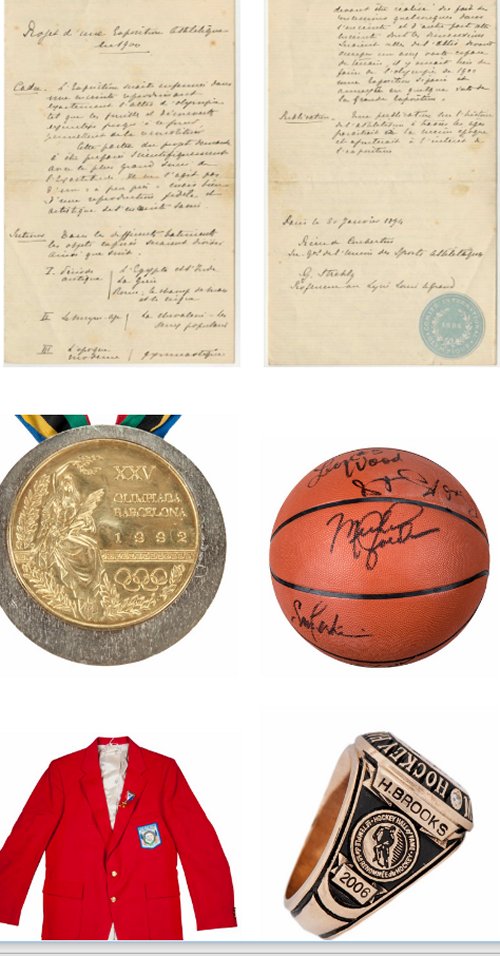