In what is quite possibly the company’s most eclectic auction ever, the 2015 Goldin Auctions Opening Day Auction features more than 1,450 lots of sports and historical memorabilia from such legendary figures as John D. Rockefeller, Babe Ruth, Walt Disney, Mickey Mantle, The Beatles, Ted Williams, and even Michael Jackson. The auction is live at www.GoldinAuctions.com and closes on May 9th.

“Whether you collect historic baseballs, game-used items, championship rings, rare trading cards, Disney memorabilia, Presidential and historical artifacts or even the Beatles, this auction has something for everyone,” said Ken Goldin, Founder of Goldin Auctions. “We encourage collectors to check out the wide array items, as many are newly discovered, and offered for the first time.”

For history buffs, the offerings are just as unique. Among the rare finds are one of the earliest known photographs of oil magnate/philanthropist John D. Rockefeller; a signed military document from Napoleon Bonaparte; a signed CDV of General Robert E. Lee; a Naval appointment document signed by Thomas Jefferson; and much more.

Music and entertainment collectors can add historical documents to their collections such as the contract signed by Michael Jackson for the album Thriller; the 1940 contract naming Walt Disney the President of Disney Productions; a 1963-64 Beatle Fan Club card signed by all four Beatles on the front; and many other such items.

Goldin Auctions is also accepting consignments for our Summer Live Auction!!! Visit our web site for more information on how to consign to this amazing event. 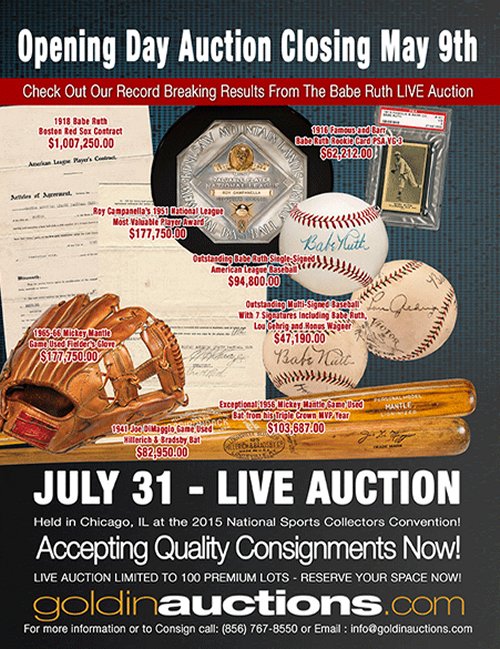