Goldin Auctions 2019 Summer Auction is now in progress, with the Catalog auction ending on August 10, 2019 (lots 83-1604) . Included in the 1,600-lot auction are amazing pieces of game worn jerseys, high-end single signed baseballs, graded cards and much more. The auction is in progress at GoldinAuctions.com.

Mike Trout is in a heated battle with Pokemon. Not for the MVP, but rather as the highest priced item in the Goldin Auctions 2019 Summer Premium Catalog Auction. As of Wednesday, July 7 at Noon, the latest bid on Trout’s 2009 Bowman Chrome Draft Prospects #BDPP89 (Orange Refractor) Signed Rookie Card (#18/25) – BGS GEM MINT 9.5/BGS 10 is $87,000 while the 1999 Pokemon First Edition PSA GEM MT 10 Complete Set (103) Featuring #4 Charizard Example is at $82,000. Featuring more than 1,500 lots of sports, entertainment and historical memorabilia, the auction is open through Saturday, August 10 at GoldinAuctions.com.

“As Mike Trout continues to build his Hall of Fame career, collectors are fervently searching for some of his rare cards,” said Ken Goldin, Founder of Goldin Auctions. “It seems like a Trout card sets a new record in every one of our auctions.”

Here’s a look at tome of the highlights of the auction. The complete catalog is available at GoldinAuctions.com.

Lot #83 — 1955 Jackie Robinson Game Used World Series Bat (PSA/DNA GU 9.5 & Letter of Provenance)- Fresh to the Hobby — This Hillerich & Bradsby R115 is un-cracked and shows outstanding use. There is some checking from repeated ball contact found on the back barrel which has been stabilized as well as numerous ball marks on the left, back and right barrel, the majority grouped on the left side. The model number “R115” is stamped into the knob end. The stamping of the signature on the barrel and the center brand are dark and clear on the warm brown ash surface of the bat. Weighting in at 34.5 ounces and measuring 35 inches, this bat matches the R115 models ordered by Robinson during the 1955 and 1956 seasons, with the nod given to 1955 due to the provenance. The bat comes with a LOA from PSA/DNA for the game use and has been graded a near-perfect GU 9.5.

Lot #93 – 1910 E98 “Set of 30” Ty Cobb, Red – SGC MINT+ 9.5 — “E”-Caramel cards from this series, made by an anonymous national producer to accompany candy, are highly sought-after period collectibles. This exceptionally rare card depicts Cobb in a tinted black-and-white photograph set against a blazing red background. This is among the very finest E98 Cobb examples in the hobby, in exemplary Mint-plus condition

Lot #103 – 1999 Pokemon 1st Edition PSA GEM MT 10 Complete Set (103) Featuring #4 Charizard Example — Presented is a 103-card complete set of 1999 Pokemon First Edition non-sports cards. Each card has been graded GEM MT 10 by PSA. While the cards have rounded corners, they are still very difficult to attain in GEM MINT condition. Demand for this set in high-grade continues to grow. As a point of reference on value, a similar-conditioned complete set of these (all in PSA GEM MT 10!) sold for nearly $100,000 in Goldin Auctions’ December 2017 Holiday sale.

Lot #114 – Bob Dylan Signed & Handwritten “Like a Rolling Stone” Lyrics (Agent LOA) – This handwritten lyric sheet comes with a LOA from Jeff Rosen, President of the Bob Dylan Music Company, who states that “In 2017 Dylan handwrote and signed his lyrics on a rare and limited basis. 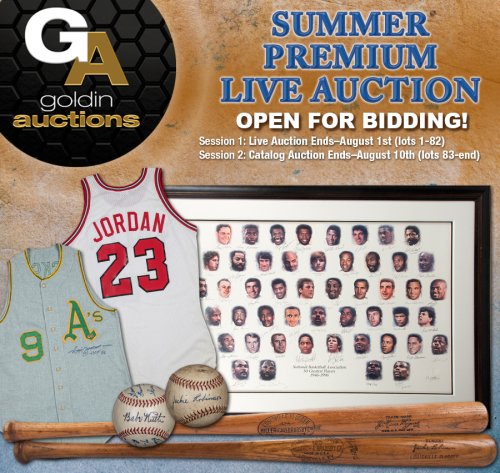 Goldin Auctions is currently accepting consignments for all its 2019 auctions. To consign an item, visit GoldinAuctions.com or call 856- 767-8550 or email info@goldinauctions.com.