Over 100 years ago, like many youngsters of his era, Clarence Barnes assembled a trading card collection in scrapbooks. Unlike many, not only were his scrapbooks massive but more importantly they were saved. These scrapbooks, which have been in the possession of his family ever since, will finally be available for the world to enjoy as Goldin Auctions presents, The Cambridge Collection in its upcoming “Legends of October” auction from October 4 – November 1, 2013. For more information or to register for a free catalog visit www.GoldinAuctions.com.

This massive 2,200 card collection includes more than 250 baseball cards along with a wide assortment of cards representing a variety of different subjects. The baseball card portion of the collection is dominated by 170 Old Judge Baseball cards from the late 1800’s. The stunning photographic images make Old Judge cards the most collected cards of the 19th Century. Since the cards in The Cambridge Collection have bee shielded from light for the past century, they offer some of the most illustrious images to be seen on such a collection.

“With the cards glued onto the pages for more than a century, one really gets the feeling that they are looking at something special,” explains Ken Goldin, Founder of Goldin Auctions. “We are honored that the heirs to this wonderful piece of American history have entrusted us to find a new home for this historic collection.”

The Cambridge Collection will be sold as a single lot of two scrapbooks. Among the 250 baseball cards in the scrapbooks are most of the star players from that era including; Cap Anson, Harry Wright Clark Griffith, John Ward, Billy Sunday, Connie Mack and more. In addition to the 170 Old Judge cards, it also includes three, rare Gypsy Queen cards, of Hall of Famers Roger Connors, Buck Ewing and Tim Keefe.

The 1,950 non-baseball cards represent a variety of different subjects including actors, actresses, world leaders, heroes and villains from America’s Wild West days plus boxers and other sportsmen like Jack Dempsey.

The scrapbooks were made by young Clarence in the late 1880’s through the early 1890’s. In the years following, he attended Yale University where he himself was a star baseball player. He turned down an offer to play for the Red Sox to pursue a successful career in law which culminated in him serving as Attorney General of the Commonwealth of Massachusetts from 1945-49. He died on May 26, 1970. 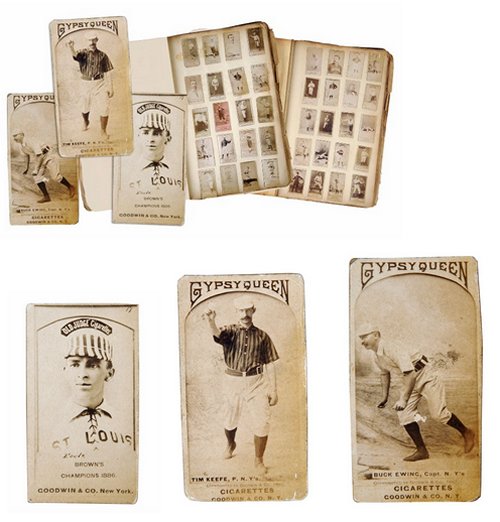