The catalog auction (Lots #90-964) are open for bidding through August 11 at GoldinAuctions.com. Bid, view and register at goldinauctions.com.  Goldin Auctions is currently accepting consignments for its September Internet Auction and October Legends Auction. To consign an item, visit GoldinAuctions.com. 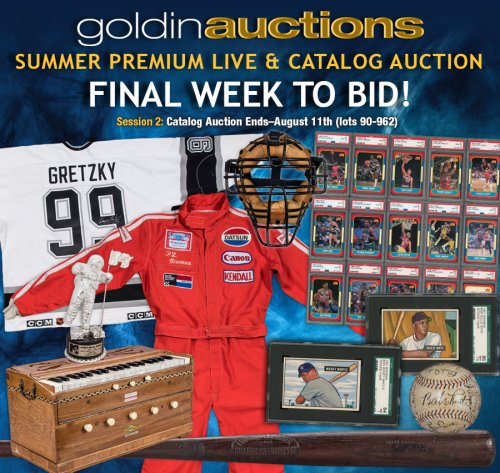 Fresh on the heels of Goldin Auctions’ record-setting live auction at the National Sports Collector’s Convention last week, the Goldin Auctions 2018 Summer Catalog Auction closes on Saturday night with more than 850-lots of sports, entertainment and historical memorabilia at GoldinAuctions.com.
Here’s a look at some of the auction highlights and current bids as of Aug 8 at 9:00 am ET.