When you gather the most passionate sports memorabilia collectors together in the same room with a collection of rare and unique auction items during the industry’s biggest annual event you can expect fireworks. And that’s exactly what happened last night during a record-setting night in Cleveland at the Goldin Auctions 2018 Live & Premium Summer Auction during the National Sports Collectors Convention.

“Our annual event during The National is always special, but this was a truly remarkable night with great energy in the room and a flurry of bidding by our live guests as well as online and phone bidders,” said Ken Goldin, Founder of Goldin Auctions. “I congratulate our winning bidders and our consignors for such a successful night.”

The corresponding catalog auction is open for bidding through August 11 at GoldinAuctions.com. Here’s a look at some of the auction highlights and record-setting prices realized. 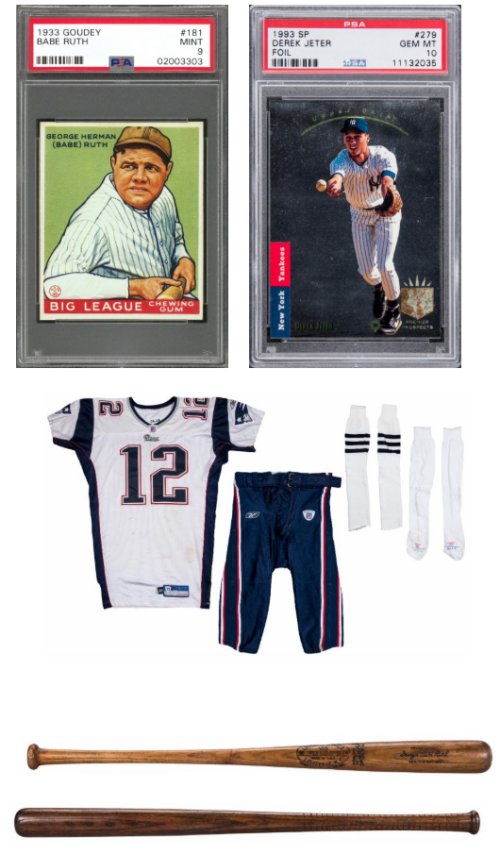 Lot #21- 1933 Goudey #181 Babe Ruth PSA MINT 9 – One of just six examples at its tier (with only one graded higher) among more than 1,000 copies recorded in PSA’s census reporting. This fabulous piece is the first PSA MINT 9 Goudey Ruth card to be offered for public sale in more than a decade. The highest price ever paid for this card (**RECORD PRICE: $319,150)

Lot #2 – 1914-15 Nap Lajoie Game Used Hillerich & Bradsby 40k Model Bat (PSA/DNA GU 8) – PSA/DNA, recorded that they know of only two other surviving game used Lajoie bats in existence, and unlike this one, the other two bats have blank barrels with no Lajoie signature stamping. (**RECORD PRICE $136,252)

Lot #13- 1961 Mickey Mantle Game Used New York Yankees World Series Cap (MEARS) — Randy Nicklas, the personal charter pilot for the Yankees and Football Giants during the 1950’s and 60’s was gifted this hat by Mantle after the final game of the 1961 World Series. Comes with a LOA from MEARS for the game use. The most ever paid for a Mantle cap (**RECORD PRICE: $94,517)

Lot #34 – 2004 Tom Brady Game Used & Photo Matched Patriots Road Uniform from Super Bowl Season -This is the complete uniform worn by Tom Brady. Two white strip tags with “BRADY vs. MIAMI 12/04 road” and “12-04 vs. MIAMI MNF road” are sewn in the pants and jersey. This jersey comes with a LOA from MeiGray. The most ever paid for a Brady jersey/uniform (**RECORD PRICE: $81,015)

Lot #85 – Extremely Bold Lou Gehrig Signed Official A.L. Baseball (PSA/DNA & JSA) – Gehrig’s signature is in very strong black fountain pen and transcends any of the overall toning of the leather. Comes with a LOAs from JSA and PSA/DNA for the signature. PSA/DNA has graded Gehrig’s signature a solid 6. (FINAL PRICE: $53,396)