Goldin Auctions, the leading marketplace for collectibles and trading cards, announces that its March Premium Auction has broken several world records and sold a total of $38.2 million in trading cards and collectibles. The auction sales total is the industry’s second-highest ever, behind only the company’s Winter Auction, which closed March 7 and sold $45.2 million worth of items.

During the auction, the company set records for the highest-ever sale price for any soccer card, $555,960 for a 1979 Diego Maradona Rookie Card, as well as the highest sale price ever for a golf card, $369,000 for a 2001 Tiger Woods Signed Rookie Card. In addition, the auction smashing the record for the highest price ever for a trading card of Hollywood superstar and former University of Miami football player Dwayne “The Rock” Johnson. A 1994 card featuring Johnson, which was previously owned by producer Timbaland, sold for $81,180, shattering the previous high of $45,100 paid for this same card in February. 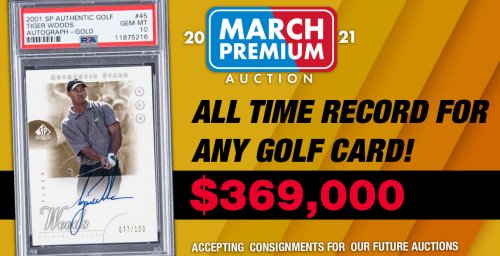 “LeBron James, Jordan, Brady, Mantle — those names are always going to be huge fan draws and their cards and memorabilia will continue to command major prices,” said Founder and Executive Chairman Ken Goldin. “But what we’re seeing now is equal enthusiasm for memorabilia and cards from soccer, golf and wrestling stars, which is something we hadn’t seen in the past. As the hobby continues to open up to a younger and more international audience we’re likely to see more records be broken across sports!”

Additional notable items from this auction include:

In March, Goldin Auctions announced a new integration with the Winklevoss-owned  cryptocurrency exchange and custodian, Gemini. The agreement enables users to buy and sell trading cards and other collectibles with Bitcoin and Ethereum. With the close of its Winter Auction, the company also recently announced that it surpassed its entire 2020 year in sales just three months into the year. So far this year, the company has already done over $130 million in sales.