With historic items from legends like Sandy Koufax, Muhammad Ali, Joe DiMaggio, Babe Ruth, Michael Jordan and Mike Trout, the Goldin Auctions 2018 Spring Premium Live Auction has gotten the attention of collectors. The 53 premium lots will be sold at a live auction on Saturday night, April 28 at the NYY Steakhouse in New York City. An additional 570+ lots are up for bids at GoldinAuctions.com, through May 5.

The auction is open for bidding at GoldinAuctions.com. Here’s a look at some of the marquee items and the current bid as of Friday, April 27 at 9:00 am ET.

Lot #3 – 1929-30 Babe Ruth Game Used Louisville Slugger R34 Bat – Bone Rubbed PSA/DNA GU 10 (Current Bid: $110,000) – This fresh-find being offered for sale for the first-time dates to the prime of Ruth’s career. PSA/DNA has dated it to Ruth’s tremendous 1929-1930 seasons. The center brand is the C-5B variation that was used on bats ordered between 1928 and 1931. To further narrow the dates, the weight of the bat corresponds to those ordered by Ruth in 1929-1930. There are two distinct characteristics found on Ruth game used bats that are present on this bat: left barrel contact area and scoring to the handle and barrel. Green paint streaks from bat trays can be seen on its barrel and “Yankees 1930” has been hand written in vintage fountain pen above the center brand. 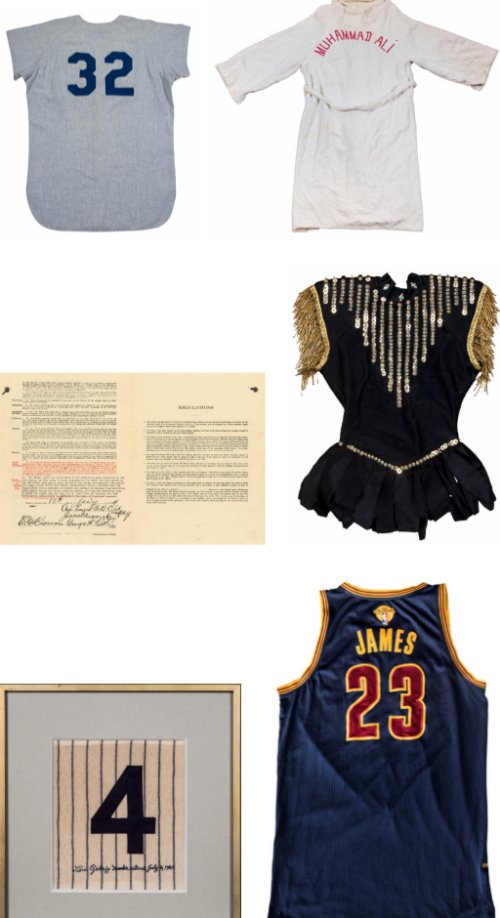 Lot #41 – 1965 Muhammad Ali Fight Worn Robe from Ali- Liston 2 (Current Bid: $85,000) – Although the fight was a rematch with Liston, it would be the first time Ali would enter the ring under the name Muhammad Ali and as a result he had it proudly emblazoned across the back of the white robe in red lettering. The historic fight is best remembered for the “phantom punch” and the famed Neil Leifer photo of Ali standing above the defeated Liston. It comes with a notarized letter of provenance from John Pradella who was gifted the robe immediately after the fight by Angelo Dundee and a LOA from noted boxing expert Craig Hamilton.

Lot #4- 1951 Joe DiMaggio Game Used Hillerich & Bradsby D29L Model World Series Bat PSA/DNA GU 10 (Current Bid: $65,000) – A scarce style of bat with impeccable provenance, used by the most graceful player to ever step foot in a ballpark. This bat comes with a LOA from PSA/DNA who have graded this bat a perfect GU10 and an LOA from MEARS, grading this bat a near-perfect A9.5 for the game use as well as the signed letter of provenance from former Yankees batboy Joe Carrieri.

Lot #37 – 2015 LeBron James NBA Finals & Eastern Conference Finals Game Used Jersey (Current Bid: $52,000) -Offered here is James’ jersey from the 2015 NBA Finals and Eastern Conference Finals in his return to Cleveland season. James wore the jersey for a half during Games 1 and 2 of the conference finals and the second halves of both Game 1 and Game 2 of the NBA Finals. James finished with a career Finals-high of 44 points in Game 1, and a triple-double in the second half of Game 2. This is one of the best James game used jerseys ever offered, and it comes with an NBA/MeiGray Group LOA.

Lot #7 – 2011 Mike Trout MLB Debut Bat Used for Many Career Firsts (Current Bid: $46,000) -Presented here is a truly remarkable and potentially historic piece of memorabilia. This Old Hickory J143 model bat was used by Trout during many of the “MLB firsts” of his ever-progressing Hall of Fame career including: his debut game; first hit; his first career RBI; and his first extra base hit. The game used experts at PSA/DNA have photo matched it to six games, including the historic “firsts” previously mentioned (July 8, 9, 10, 15, 16, 17). This bat itself displays outstanding use and in un-cracked and comes with a full and detailed LOA from PSA/DNA and has been given a perfect grade of GU 10.

Lot #33 – 1984-85 Michael Jordan Game Used Rookie Season Bulls Road Jersey MEARS A8 (Current Bid: $44,000) –
Offered is one of the finest examples of a rookie Michael Jordan game used Bulls jersey. This size 42 Rawlings all mesh red road jersey comes with a detailed letter of authenticity from the game used experts at MEARS, who have graded this Michael Jordan rookie jersey a solid A8. In all, seven lots featuring Jordan game-worn jerseys and three lots of Jordan game-worn sneakers are up for bids.

Lot #40 – 1990-91 Wayne Gretzky Game Used & Signed LA Kings Home Jersey (Current Bid: $20,500) – This Kings home jersey dates to the 1990-1991 season in which Gretzky led the NHL in points and assists, earning him the Lady Byng Memorial Trophy and his ninth Art Ross Trophy. The Great One has signed the right chest of this Kings home jersey in black marker, adding his number “99.” Comes with an LOA from MeiGray for game use and 1991-dated letters of provenance from Gretzky, James Fox and Peter Demers authenticating game use and signature.

Lot #6 – 1962 Mickey Mantle All-Star Game used Hillerich & Bradsby B220 Model Bat PSA/DNA GU 9 (Current Bid $20,000) – From his MVP and World Series Championship season, the bat was used by The Mick at the All-Star game at Griffith Stadium. The model number “B220” has been stamped into the knob and the barrel features the special “1962 ALL-STAR GAME” and “WASHINGTON” stamping.

Lot #45 – Historic 1992 Tonya Harding Competition Worn Black Costume from 1992 Olympics & World Championships (Current Bid: $10,000) –Tonya Harding wore this black sequin-trimmed skating outfit before the scandals, when she was the first American woman to land a triple axel in completion. The outfit shows medium wear. A true piece of both pop culture and sports history. The outfit comes with a signed LOA from Tonya Harding attesting to her wearing it at the 1992 Olympic Games, 1992 World Championships and 1992 Tour of Olympic & World Champions and a COA from JSA for the signature on the Harding LOA.