In the 2013 Goldin Auctions Summer Spectacular, collectors will have the opportunity to bid upon more than 1,100 items of unique and rare memorabilia from a host of sports legends including NBA great Kobe  Bryant. The auction will be open from June 17-July 19, 2013 at www.GoldinAuctions.com. The auction preview will begin on June 14. For more information, or to register for a free catalog, visit www.GoldinAuctions.com.

Here’s a list of key Bryant memorabilia in the 2013 Goldin Auctions Summer Spectacular:

Each of these six items are accompanied by a Letter of Authenticity signed by Kobe Bryant’s mother Pamela Bryant. The LOA’s state that the items are all authentic and have been in her possession until being part of this auction. Goldin Auctions will also be issuing a LOA with each item guaranteeing its authenticity as well as its origin. Goldin Auctions has title and unencumbered rights to sell each of the six aforementioned items. 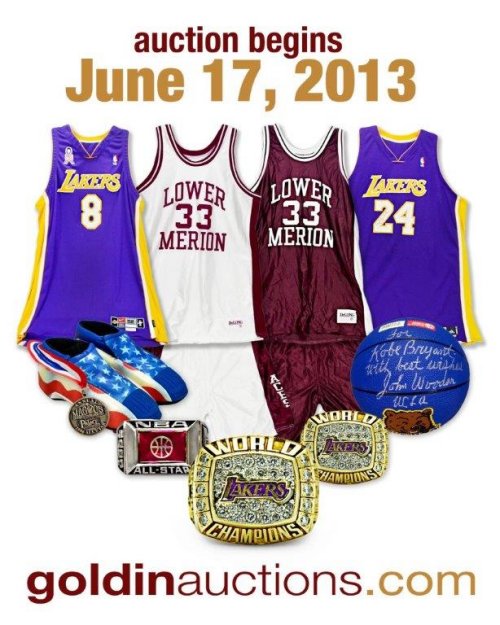 The four items highlighted with an asterisk (*) above, will have 50 percent of the winning bid price donated to a charity which will be announced shortly.

Many other items related to the Lakers star have been consigned by collectors all across the world including: a 2006-07 Lakers game-worn jersey; a 2001-02 Lakers game-worn uniform; a UCLA basketball signed by legendary coach John Wooden and personalized to Kobe Bryant; several rare prototype sneakers and other footwear; plus a selection of autographed items and more. The complete collection of Bryant-related memorabilia will be available for preview on June 14 at www.GoldinAuctions.com.

“We are thrilled to be able to offer this spectacular collection of memorabilia from one of the most collectable sports superstars of this generation,” said Mr. Goldin. “The Kobe Bryant items we are offering, coupled with the rare collectibles we have from the likes of Derek Jeter, Babe Ruth, Mike Tyson and Jackie Robinson makes this one of the most anticipated sports memorabilia auctions in recent memory.”

About Goldin Auctions
Sports memorabilia impresario Ken Goldin has sold more than $600 million in memorabilia from many of the biggest names in sports, history and pop culture and was the pioneer of using the medium of television to sell sports memorabilia. Earlier this year, Goldin Auctions sold a Honus Wagner T206 card for a public sale record $2.1 million. Goldin Auctions strives to break new ground and offer collectors the best in collectible treasures up for auction in the marketplace. All game worn or autographed items come with team, player, league or additional LOA from industry leading authenticators; and collectors can bid with confidence that their proxy/ceiling bids remain confidential. For more information, visit www.GoldinAuctions.com.