The biggest college basketball story of last season was Zion Williamson blowing out a sneaker and injuring his leg in the opening minute of Duke’s rivalry game versus North Carolina on February 21. Zion became as synonymous with Nike as he did with windmill dunks and freak athleticism. That’s why, a pair Zion Williamson Nike sneakers, being offered for sale in the Goldin Auctions 2019 Summer Auction beginning on July 8th at GoldinAuctions.com, is so unique.

The pair available are size 14 black and blue Nike Kyrie 5’s with a white swoosh. They were worn by Williamson in just the fourth game of his memorable freshman season — the opening game of the Maui Invitational on November 19, 2018. Duke beat San Diego State 90-64 with Williamson playing 18 minutes and recording 13 points, 6 rebounds, 1 assist, 5 steals and 1 block. 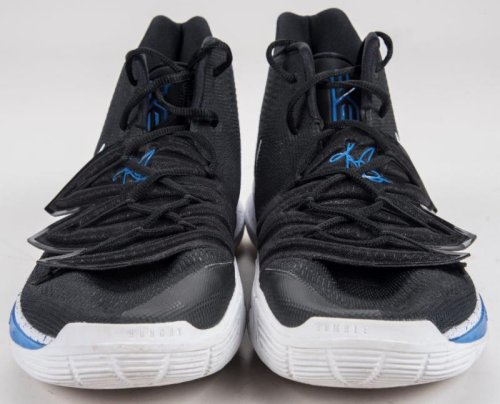 “Zion Williamson’s sneaker malfunction was the most iconic and memorable moment of the college basketball season and as a result Zion and his sneakers will always be synonymous,” said Ken Goldin Founder of Goldin Auctions. “Even though these are not those historic sneakers, the fact that he played in just 33 college basketball games and these are his first sneakers to be offered at auction make them a truly special item.”