Goldin Auctions is helping an NFL sanctioned charity, “Taste of the NFL,” and one of the most respected player charities, “The Anquan Boldin Foundation,” raise funds by offering 11 lots of memorabilia for sale with proceeds benefitting the two charities in the 2015 Goldin Auctions Winter Auction through February 7, 2015 at www.GoldinAuctions.com.

“We are pleased to offer these unique experiences and collectible items to help support these two well-respected charities” said Ken Goldin, Founder of Goldin Auctions. “It’s truly a win-win as our customers have the chance to bid on some unique items and experiences while A Taste of the NFL and the Anquan Boldin Foundation raise much needed funds to help support their mission.” 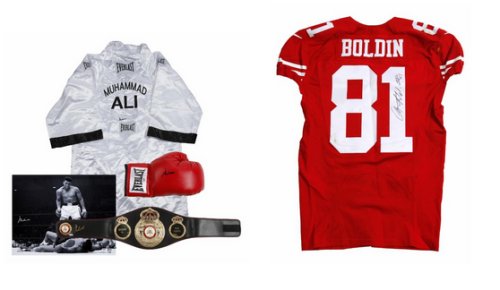 For more details and images of the items and the 1,400+ lots of memorabilia, visit www.GoldinAuctions.com.

About Taste of the NFL

For 23 years, Taste of the NFL has been working to address the needs of the hungry and homeless by raising awareness and funds money through both online programs and large events. Since 1992, the Taste of the NFL (a 501c3 organization) has rallied the country’s top chefs and the NFL’s greatest players to raise money in support of food banks throughout the United States. This is done primarily through three venues: On-line donations during the KICK HUNGER CHALLENGE® (Sep – Jan); Locally hosted Taste Of The NFL events by NFL teams and their local food banks with players and local chefs; The Super Bowl Taste Of The NFL – The Party with a Purpose®. Held on the eve of Super Bowl. For more information visit www.TasteoftheNFL.com)

About the Anquan Boldin Foundation

Established in 2004, the Anquan Boldin Foundation (Q81 Foundation) is dedicated to expanding the educational and life opportunities of underprivileged children. As evidenced by charitable activities in Florida, Arizona, Baltimore and California the foundation has a ten-year history of offering after-school programs, full-time college scholarships as well as dental care and food programs for disadvantaged youth. While Anquan Boldin is now widely recognized as one of the top wide receivers in the NFL, he has never taken his success for granted. Boldin was raised in the impoverished area of Pahokee, Fla., where he had basic necessities but not much more. Now a husband and father of two, he leads by example through his inspiring philanthropic work all over the world. Some examples of his efforts were recently chronicled in a cover article entitled “‘Tis Better to Give'” in the Fellowship of Christian Athletes monthly publication. As his legacy continues to grow, both the Baltimore Ravens and the San Francisco 49ers have recently recognized him as the Walter Payton Man of the Year team honoree. The award is given annually by the NFL to honor a player’s volunteer and charitable work, as well as his excellence on the field. In addition, Anquan, along with his wife Dionne Boldin, recently announced the establishment of an endowment they made available through a charitable gift of $1 million they personally made to the Anquan Boldin Foundation. This endowment will be used to provide an annual distribution of scholarships to high school graduates. For more information about the Anquan Boldin Foundation, visit www.Q81.org.

Sports memorabilia impresario Ken Goldin has sold more than $600 million in memorabilia from many of the biggest names in sports, history and pop culture and was the pioneer of using the medium of television to sell sports memorabilia. Earlier this year, Goldin Auctions sold Babe Ruth’s 1918 contract for a record $1.02 million. The previous year they sold a Honus Wagner T206 card for a public sale record $2.1 million. Goldin Auctions strives to break new ground and offer collectors the best in collectible treasures up for auction in the marketplace. All game worn or autographed items come with team, player, league or additional LOA from industry leading authenticators; and collectors can bid with confidence that their proxy/ceiling bids remain confidential. For more information, visit www.goldinauctions.com.