A long-time St. Louis Cardinals fan who was building a memorabilia collection of the team’s top prospect, Oscar Taveras, has consigned the nine items into the Goldin Auctions 2015 Winter Auction scheduled for January 12, through February 6, 2015 at www.GoldinAuctions.com. The consigner, who acquired the items just days before Taveras’ death, has made arrangements to donate his proceeds from the auction to Taveras’ family.

The opening bid for each of the nine Taveras items in the auction represents the amount the consigner paid for them. He will donate his proceeds, beyond the opening bid, to Taveras’ family. One of the top prospects in baseball, the 22 year-old Taveras was killed in a car accident in the Dominican Republic, on October 26, 2014.

“As a big fan of the Cardinals and the young star, our consigner wanted to do something to help the Taveras family,” said Ken Goldin, Founder of Goldin Auctions. “We commend him for his thoughtfulness and hope our bidders can help him make a large donation to the Taveras family.”

Here’s a look at the nine Taveras items being offered for sale at www.GoldinAuctions.com. 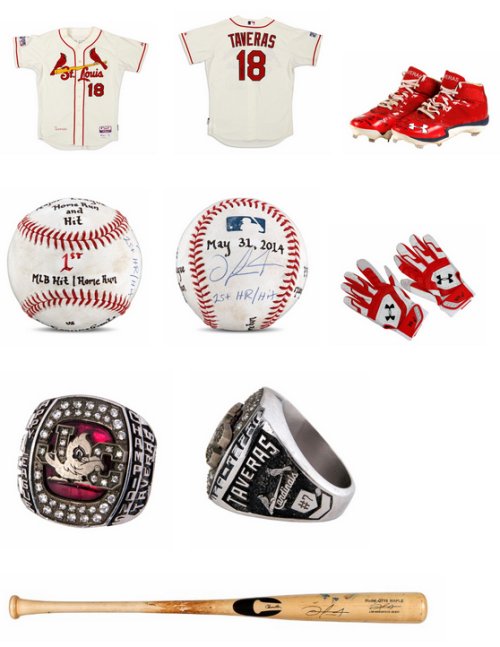 Lot #51 – Oscar Taveras 2010 Johnson City Cardinals Championship Ring – The words “Appy League” are engraved along the left side of the top of this size-12, 31-gram ring with “Champions” on the right. “Taveras” name and the St. Louis Cardinals’ birds on bat logo, and Taveras’ “#7” are carved into one shank, with “2010,” and the Cardinals “STL” logo on a baseball as well as Johnson City’s 46-24 record are on the opposite side.

Lot #52 – Oscar Taveras 2011 Quad City River Bandits Championship Ring – This size-10, Midwest League championship ring weighs approximately 30 grams. It has a River Bandits raised logo on its top with “Midwest League” engraved above the logo and “Champions” underneath with four cubic zirconia gemstones on either side. “River Bandits,” and “2011,” are etched into one side shank above and below a white and yellow QC interlocking logo, with “Taveras,” and “outfield” around an engraved red Cardinals logo on the opposite shank

Lot #56 – Oscar Taveras Game Worn and Signed/Inscribed Cleats from MLB Debut Game (JSA LOA) – The size 11 high-top Under Armour spikes were worn for the phenom’s first big league hit, a 418-foot game winning homer against the Giants on May 13, 2014. Each is dated and signed on the toe in black sharpie by Taveras, along with the words “1st Major League HR/Hit.” “TAVERAS” is stitched on each tongue in white, and the traditional Cardinals-red footwear shows light game use but is in terrific condition.

Lot #59 – 2014 Oscar Taveras Debut Game Used & Signed Batting Gloves (PSA/DNA)- This pair of Under Armour red, gray and white batting gloves show great game use and have each been signed by Taveras on the palm in black ink with the notation “2014 1st HR/Hit”.