Amid a period of unparalleled interest in trading cards, collectibles and memorabilia, more than 75,000 bids were placed during Goldin’s latest auction. The number of bids is a new record for the company and all were placed as part of Goldin’s February Sports & Pop Culture Auction.

In addition to the massive number of bids, the auction also took in $23 million in sales and set several records for individual item prices, headlined legendary athletes and rapidly rising stars. Most notably, a 2006 Futera Grand Prix Lewis Hamilton card sold for $312,000, setting a new all-time high for any F1 card.

Additional rare, valuable and record-breaking items from the auction included:

“While the final price realized is a good measure of how popular an item is, an equally important way to judge how sought after something is is the number of bids it receives,” said Goldin Executive Chairman and Founder Ken Goldin. “A healthy amount of bids in an auction signals overall good health in a business and an industry. A stratospheric, record-breaking number of bids like the 75,000-plus that we just saw suggests that we’re still nowhere close to the ceiling in terms of interest in the hobby. 2022 is already off to a hot start and we can’t wait to see what’s next.” 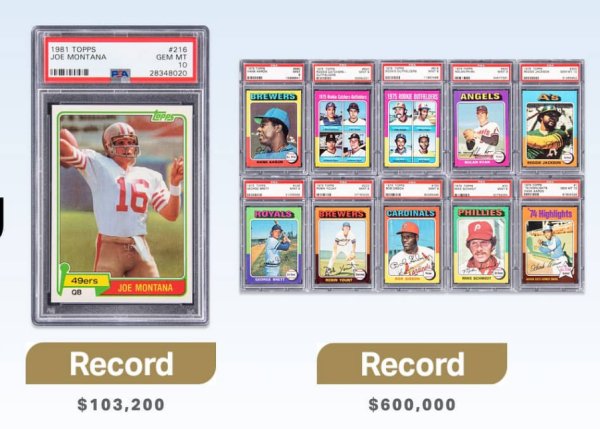 Goldin has built a reputation as the trusted leader in trading cards, memorabilia and collectibles. The company is also actively accepting consignments for future auctions. To inquire about consigning items, email sell@goldin.co.

Goldin is the leading collectibles marketplace. Founder Ken Goldin has sold more than $1.4 billion in memorabilia from many of the biggest names in sports, history, and pop culture. The company routinely sets records for the most expensive trading cards and other memorabilia ever sold. Lifelong collectors and new hobbyists alike trust Goldin because the company professionally authenticates everything it sells. Goldin is the official auction partner of the Naismith Memorial Basketball Hall of Fame, The Major League Baseball Players Alumni Association, The Jackie Robinson Foundation and the Babe Ruth Birthplace and Museum. Learn more at goldin.co, and on Twitter and Instagram.