Goldin Auctions, the leading marketplace for collectibles and trading cards, is preparing to shatter auction records with the launch of its Elite Auction. Now open for bidding and concluding on October 23-24, 2021, the Elite Auction will include a diverse and rare assortment of premium trading cards and sports collectibles items assembled for sale. Bid, view and register for the auction at goldinauctions.com.

A massive array of rare vintage and modern trading cards and memorabilia is now up for auction at Goldin. The company’s October Elite Auction is headlined by items from some of the greatest athletes of all time, both past and present, including Mickey Mantle, LeBron James, Tom Brady, Hank Aaron, Kobe Bryant, Babe Ruth and dozens of others.
In LOT #1, Goldin has listed a PSA NM-MT 8 Mickey Mantle rookie card. One of the very best examples in the world in its grade, this card is one of the most sought after in the hobby. Also sure to draw collector attention are two incredible LeBron James cards, including a BGS NM-MT+ 8.5/ 2003-04 rookie card (LOT #2) and a 2006-07 UD “Ultimate Collection” Logoman Autograph card, of which there is only one on earth (LOT #3).
In addition to hundreds of other incredible cards and memorabilia items, Goldin is also auctioning a 2003/04 Upper Deck basketball factory-sealed case of trading cards, which could contain incredibly valuable rookie cards from NBA legends including LeBron, Dwyane Wade, Chris Bosh and Carmelo Anthony. Also included in this auction is a special Lou Holtz Collection that features 25 unique items including game-worn clothing, trophies and other memorabilia, such as a signed and inscribed original manuscript for the film “Rudy.” All items from the collection come with a letter of authenticity from Holtz and 100% of proceeds will go to the Holtz’s Heroes Foundation.
“Handling the sale of one or two ultra-premium items during an auction is an amazing feeling,” said Goldin Auctions Executive Chairman and Founder Ken Goldin. “Handling dozens of some of the rarest items like those included in our Elite auction is like Christmas in October! Every item in this auction has an incredible story and if you’re a serious collector, this is an auction that you need to check out as soon as possible.” 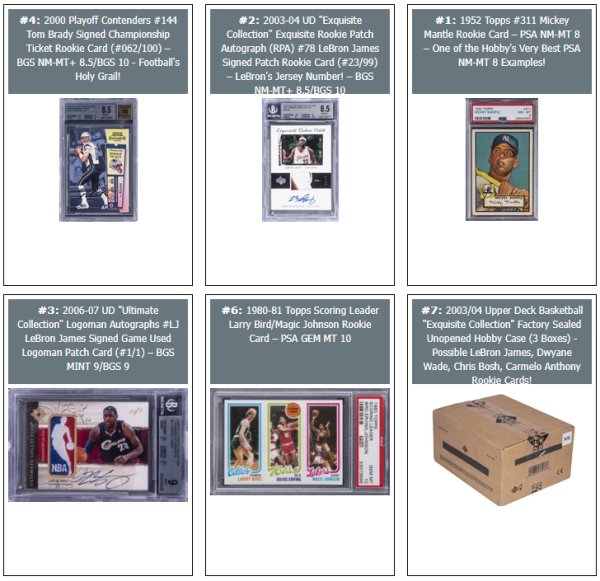 Goldin has built a reputation as the trusted leader in trading cards, memorabilia and collectibles. So far this year, the company has already done over $275 million in sales. Goldin’s Elite auction is currently open for bidding. Goldin Auctions is also actively accepting consignments for its Monthly Card Auctions. To inquire about consigning items, email info@goldinauctions.com.

Goldin is the leading marketplace for trading cards, collectibles and memorabilia. Founder Ken Goldin has sold more than $1.2 billion in memorabilia from many of the biggest names in sports, history, and pop culture. The company routinely sets records for the most expensive trading cards and other memorabilia ever sold. Lifelong collectors and new hobbyists alike trust Goldin because the company professionally authenticates everything it sells. Goldin is the official auction partner of the Naismith Memorial Basketball Hall of Fame, The Major League Baseball Players Alumni Association, The Jackie Robinson Foundation and the Babe Ruth Birthplace and Museum. Learn more at GoldinAuctions.com, and on Twitter and Instagram.