Goldin, the leading marketplace for collectibles and trading cards has launched there Monthly Auction which concludes on June 4-6, 2022.  Bid Now on over 4,000 lots of ultra-rare and premium trading cards depicting past and present stars including LeBron James, Michael Jordan, Luka Doncic, Jayson Tatum among others.  Bid, view and register for the auction at goldin.co.

The auction is headlined by some of the most sought-after cards on earth, including a 2003-04 LeBron Exquisite rookie patch card, a 2018-19 Panini National Treasures Luka Doncic signed patch card and a 1986-87 Fleer Michael Jordan rookie card in GEM MT 10 condition. Prices realized for each of these cards are expected to soar well into six figures.

In addition to more than 2,500 trading cards available for bidding, the auction features incredible, game-worn jerseys including Steph Curry’s 20,000-point game jersey. The auction also features game-worn kits from Cristiano Ronaldo, Johnny Unitas, Kobe Bryant and many other legends. Additionally, the May Monthly Auction boasts hundreds of incredible football, baseball, F1 and pop culture collectible items. Most notably perhaps is a copy of the 1962 Marvel Amazing Fantasy #15 comic, which features the first appearance of Spider-Man.

“Late May and early June means one thing for basketball fans: the NBA Finals,” said Goldin Executive Chairman and Founder Ken Goldin. “This is the time of year when legacies are made – when young stars burst onto the stage and cement their status as legends. The impact that a championship ring has on the value of collectibles is tangible and we’ve got some incredible items in this auction featuring guys fighting for a championship right now.” 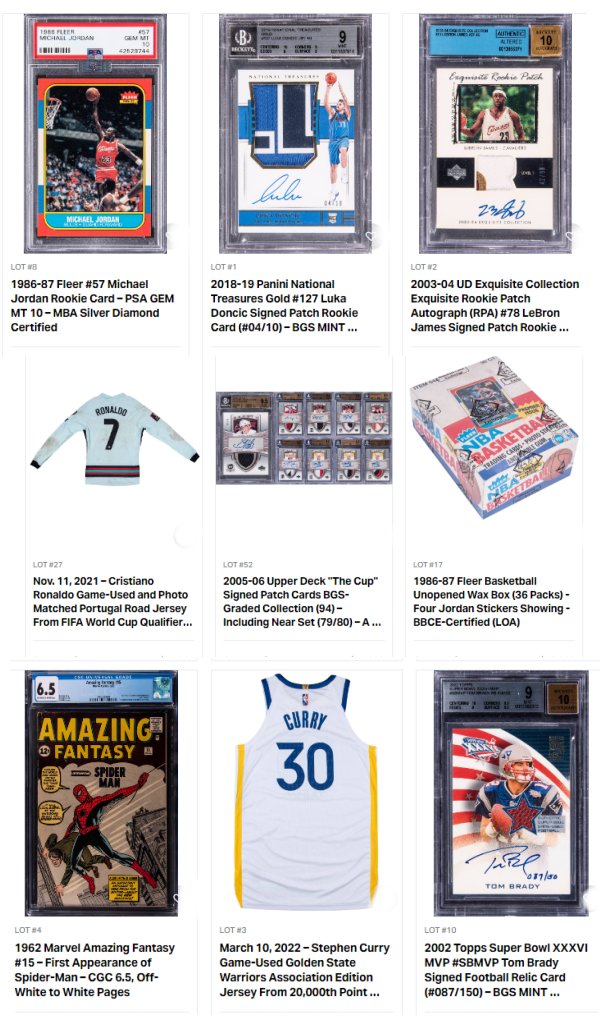 The May Monthly Auction closes June 4 – 6. Goldin, which has built a reputation as the trusted leader in trading cards, memorabilia and collectibles, is also actively accepting consignments for its future auctions, including its June Elite Auction. To inquire about consigning items, email Sell@goldin.co.