Goldin’s Sports Elite Auction Ends November 26, 2022.  As sports collectible items continues to soar in popularity, Goldin announces it has carefully crafted a one-of-a-kind collection featuring some of the most highly-sought after vintage trading cards, game-used apparel and memorabilia on earth. The auction is headlined by items from some of the most iconic and culturally significant sports stars like LeBron James, Tom Brady, Michael Jordan, Muhammad Ali  and more.  Bid, view and register for the auction at https://goldin.co/buy.

As Americans prepare for Thanksgiving, Goldin announces its November Elite Sports auction featuring hundreds of items – including several ultra-rare and valuable collectibles – that every collector will surely feel grateful for.

The leading collectible marketplace carefully curated the Elite auction with amazing trading cards, ticket stubs and memorabilia, including one of the hobby’s finest modern artifacts, a 2008-09 Michael Jordan/Larry Bird/Magic Johnson Triple Logoman card which already has a current bid of $260,000. Sure to pique the interest of every boxing and sports fan is the 1978 Muhammad Ali’s Three-Times Heavyweight Champion Ring that is arguably one of the most important Ali memorabilia items ever put up for auction.

“November is a time to remember what you’re thankful for. At Goldin, we’re thankful for family, friends, one-of-ones, rookie patch autograph cards and hall-of-fame athlete memorabilia,” said Goldin Executive Chairman and Founder Ken Goldin. “Some of the greatest sports figures of all time are represented in this month’s auction so be sure to visit our site and let us know what you’re thankful for in the form of your bids.” 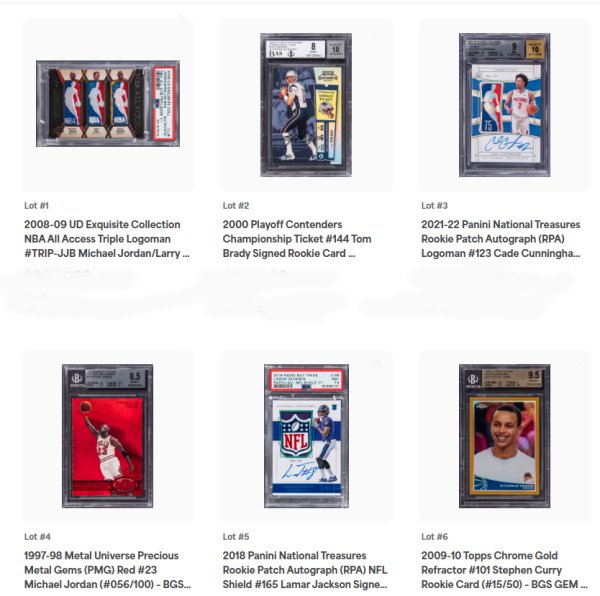 The event features more than 300 marquee and coveted items currently available for bidding, some of which include:

Goldin has built a reputation as the trusted leader in trading cards, memorabilia and collectibles.  The Sports Elite Auction is open and closes November 226, 2022. Goldin is also actively accepting consignments for future auctions. To inquire about consigning items, email Sell@goldin.co.