Goldin’s Vintage Card & Memorabilia Ends October 8, 2022. As vintage collectible items continues to soar in popularity, Goldin announces it has carefully crafted a one-of-a-kind collection featuring some of the most highly-sought after vintage trading cards, game-used apparel and memorabilia on earth. The auction is headlined by items from some of the most iconic and culturally significant sports stars of all time from Jackie Robinson, Babe Ruth and Honus Wagner.  Bid, view and register for the auction at https://goldin.co/buy.

“The vintage collectibles market is thriving not only because there are so few of these incredible items that change hands, but because each of them is a part of our American history,” said Goldin Executive Chairman and Founder Ken Goldin. “Jackie Robinson, Babe Ruth and Honus Wager were all so much bigger than baseball and collectors want to feel connected to them by owning a piece of their legacy. We can’t wait to see the turnout for what we’re sure is going to be an amazing event.”

Over the years, Goldin has built a strong reputation as the leading collectibles marketplace. Ken Goldin and his team have brokered over $1.5 billion worth of sales of rare and highly sought-after collectible items across categories. Recent record-breaking transactions include the $7.25 million Honus Wagner T-206 Card, which is known by many as the most important baseball card ever produced. Over the years, the company has handled more than 40 individual items worth more than $1 million as well as other record-breaking sales for items featuring all-world athletes including Michael Jordan, LeBron James, Serena Williams, Mia Hamm, Kobe Bryant and others.

Goldin has built a reputation as the trusted leader in trading cards, memorabilia and collectibles. The Vintage Card & Memorabilia Auction is open and closes October 8, 2022. Goldin is also actively accepting consignments for future auctions. To inquire about consigning items, email Sell@goldin.co. 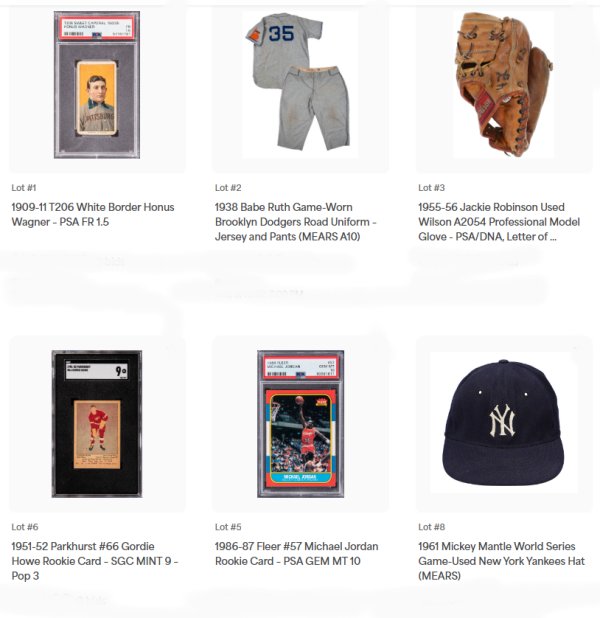