Spring training is finally here and another baseball season is just around the corner! Leading off the Goodwin & Company Masterpieces and Uncommon Commons LXIV March 5, 2016 auction are two 1952 Topps Mickey Mantle cards which have become the hobby’s most iconic card, along with the T206 Honus Wagner. Babe Ruth and autograph collectors will find a one of a kind photo signed by both Babe Ruth and Lou Gehrig. The signatures grade both 8 and 9 respectively and are authenticated by PSA/DNA. Bid, view and register for the auction at goodwinandco.com.

Lot #4 showcases a beautiful single signed Babe Ruth baseball with a fantastic bold signature. A well-focused Joe Jackson card highlights our rookie parade of first year cards which include Roberto Clemente, Wilt Chamberlain, Bobby Orr, Mickey Mantle, Willie Mays, Jackie Robinson, Frank Robinson and Brooks Robinson just to name a few. T-206 enthusiasts will not be disappointed with the offering which includes a rare T-206 Red Murray variation, a Ty Cobb with a Factory 42 reverse and a blank back Frank Chance. We would be amiss not to mention the World Wide Gum Gehrig, the W600 Tinker and the PSA Set Registry’s #1 finest complete sets of both baseball bucks and football bucks. 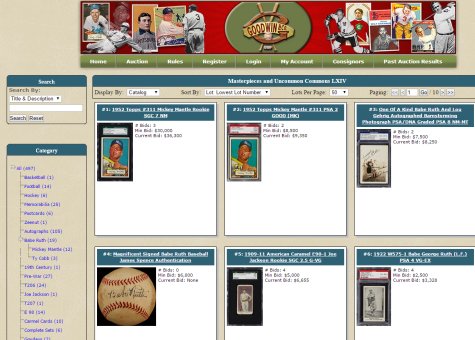 Bid, view and register for the auction at goodwinandco.com.