Spring training is finally here and another baseball season is just around the corner! Three iconic legends of American folklore highlight Goodwin and Company Masterpieces and Uncommon Commons LXX auction, Superman, Babe Ruth and Mickey Mantle. Bidding is in progress and concludes March 30, 2017. Bid, view and register for the auction at goodwinandco.com.

The oldest known Superman cover artwork from Superman issue number 12 is proudly presented in Lot 1. And, what a cover it is! It captures the moment in 1941 as the United States entered World War II. Two U.S. Servicemen are shown walking side by side with the man from planet Krypton.

The Sultan of Swat, Babe Ruth, is offered on numerous occasions throughout our catalog. Don’t miss the pack-fresh, yellow Goudey Ruth, the E121 issue, the W575 Bambino or the eye-popping Maple Crispette Babe.

The true rookie card of Mickey Mantle is presented in near mint to mint condition. This 1951 Bowman in Lot 5 is one of only 32 Mantle rookie cards graded 8 by both PSA and SGC. With these facts, it seems demand would be far greater than the supply for The Mick’s first issue. Reach for this opportunity before prices escalate to the next plateau. Other Mantle offerings include what is, perhaps, the finest 1952 Topps card graded 4.5 on the planet! Check out Lot 8 and I am sure you will agree with me on this one. 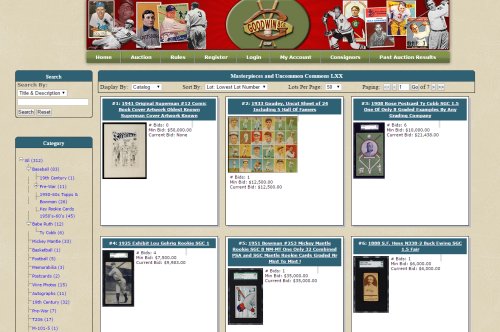 A funny thing happened in our hobby about 2 years ago when collectors discovered how under valued the Babe Ruth rookie card was and prices escalated through the roof. It is only a matter of time until the Lou Gehrig rookie card experiences the same explosion in price. We urge you to seriously consider the Iron Horse rookie card as you plan your bidding strategy.

Of course before Superman, Ruth and Mantle there was Ty Cobb who, in his own way, was all three of these legends rolled into one. The 1908 Rose Postcard of Cobb is one of only eight graded examples by any grading company. Most of these are in the hands of collectors who have no intention of ever selling their prized Cobb artifact. Opportunity certainly presents itself with this offering.

Other highlights are an extremely rare T206 Lajoie with a Lennox back, a 1933 Goudey uncut sheet with 5 Hall of Famers and a S.F. Hess card of the 19th Century’s greatest player, Buck Ewing. Numerous high grade rookie cards can be found throughout the catalog.

Bid, view and register for the auction at goodwinandco.com.  Bidding is in progress and concludes on March 30, 2017.