The Goodwin & Co Masterpieces and Uncommon Commons LXXI auction is in full swing!  The auction closes on Thursday, June 15, 2017 with a fantastic assortment of cards from the 19th century through the Topps and Bowman years, along with a myriad of Caramel and Tobacco cards, autographs and memorabilia, there is truly something for everybody!  Bid, view and register for the auction at goodwinandco.com.

Almost 70 years after his death, Babe Ruth remains, without rival, the greatest celebrity, the greatest sports icon, and the greatest superstar to ever walk the Earth. His name alone is synonymous with being the finest, the pinnacle, of whatever is being described. The superlative of superlatives is to be known as “Ruthian.”

Goodwin & Co. is proud to offer no fewer than 23 Babe Ruth items in this catalog including two 1916 Ruth rookie cards. Ruth rookie cards have become one of the hobby’s most prized artifacts, along with the T206 Wagner and the 1952 Topps Mantle. We sincerely believe that the Ruth rookie card will surpass both these hobby icons in the near future. When the bidding begins, we strongly urge you to consider one or both of these rookie cards. As you can see by the graph presented in Lot #2, prices are on a “Ruthian” up swing. Other Babe Ruth rarities include the 1933 Uncle Jacks card just recently removed from an unopened pack and the scarce Frederick Foto, one of six known and the only card of the Babe with a bat in a Boston Red Sox uniform. 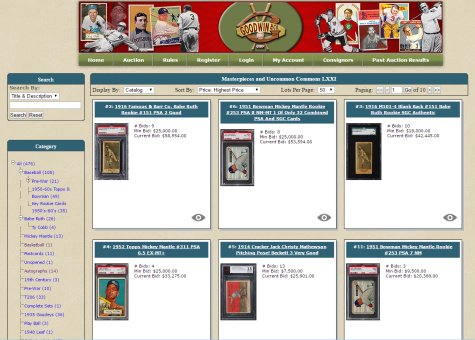 The highest graded 1935 Goudey set on the PSA Set Registry is presented in this auction. All cards are graded PSA 8 or PSA 7. You have the option of bidding on this fantastic collection either as a complete set or on individual cards.

Fresh from the Beckett grading room is an important new hobby find, a 1914 Cracker Jack set missing only 13 commons. Mathewson throwing, Cobb, Jackson, Wagner, Alexander are all proudly displayed here. It may be years before you see this many 1914 Cracker Jacks offered again in one catalog!

Bid, view and register for the auction at goodwinandco.com.  Bidding is in progress and concludes on June 15, 2017.