The hobby’s rare, never seen before and one of a kind cards are always fun and exciting discoveries. They are especially exciting, when baseball legends and a past president are concerned. Baseball legends Babe Ruth, Honus Wagner, Ty Cobb, Mickey Mantle, Joe Jackson and our 40th President, Ronald Reagan, all have one or more of these rare collectible treasures presented in the Goodwin and Company Masterpieces and Uncommon Commons LXXII. Bidding runs through September 20, 2017. Bid, view and register at goodwinandco.com.

Goodwin & Co. has extended its Masterpieces & Uncommon Commons LXXII auction due to the tremendous damage and disruption of lives caused by Hurricane Irma in the last several days on top of the devastation caused by Hurricane Harvey just weeks ago.  The auction will now close on Wednesday, Sept. 20.   “It wouldn’t be right to close this auction when so many of our faithful bidders are unable to participate,” company president Bill Goodwin said. In addition to the extension, Goodwin & Co. has partnered with the American Red Cross to create several Irma/Harvey Relief lots as part of its November 2017 Auction.  Collectors interested in donating lots to the Irma/Harvey relief fund may contact Goodwin at bill@goodwinandco.com.

Two Babe Ruth rarities lead off the auction. One of them being the Proctor Theater advertising card heralding the Babe’s vaudevillian appearance on November 3-5, 1921. It is one of only three graded copies. The Babe’s M101-6 Mendelsohn Cabinet is proudly offered on Pages 4 and 5. Only five Ruth Mendelsohn Cabinets have been graded by any grading company. Ty Cobb offerings include a Mendelsohn Cabinet (one of only three graded), a rare Boston Garter and a beautiful T202 Triple Folder depicting Conlon’s famous photo of the Georgia Peach sliding into third. Honus Wagner cards are represented by a W600 Sporting Life Cabinet, a Pittsburgh Leader card graded SGC 4.5 and a M116 blue background card. 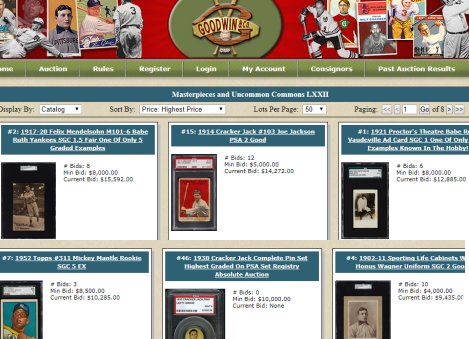 Mickey Mantle has many high grade examples in the catalog including a 1952 Topps SGC 5, a 1953 Topps PSA 8 and one of only three white back 1956 Topps Mantle cards graded PSA 8. The rookie card of Joe Jackson along with an eye-pleasing 1914 Cracker Jack are certainly auction highlights. Goodwin & Company is honored to bring you one of the more unique items we have ever presented at auction, a signed Ronald Reagan portrait. An identical portrait is housed in the Ronald Reagan Library. This portrait’s historic significance cannot be denied and it represents an important, valuable and highly unique addition to auction LXXII.

Other one of a kind items include a complete 1910 Darby Chocolate box with Sam Crawford, an 1897 sterling silver Polo Grounds Season Pass and the only graded Uzit John McGraw T206 card. We are proud to offer the #1 Cracker Jack pin set on the PSA Set Registry along with mint PSA examples of Mays, Koufax, Aaron, Clemente and Reggie Jackson. And, finally, don’t miss the Home Run Derby cards, the 95 different T206 cards with tough backs and the N173 Old Judge Cabinets.

Bidding runs through September 13, 2017. Bid, view and register at goodwinandco.com.