523 Cards Featuring Ty Cobb, Christy Mathewson, Walter Johnson
Within this auction’s 523 lots lies baseball’s most valuable relic, the Holy Grail of collecting, the legendary Honus Wagner T206 portrait. This magnificent VG 3 of Wagner is one of only 42 examples graded by SGC and PSA combined, with a mere five Wagners grading higher, and only the Gretzky/McNall card scoring above an EX 5.

In addition to the Wagner card is perhaps the rarest and most magnificent Eddie Plank on record, scoring an EX+ 5.5. Boasting a virtually never seen Piedmont 150 reverse, this Plank example is the only Piedmont 150 believed to have actually seen the inside of a cigarette pack, with the only other known examples coming from a printer’s sheet. Beyond its rare back, the particular T206 Eddie Plank features astonishingly bright blues and explosive colors, as opposed to most know cards of “Gettysburg Eddie,” which appear faded and washed out.

The other great T206 rarity of the set, the Sherry Magie (Magee) error card is a stunning EX/NM 6. This treasured trinity of cards, represents the pinnacle of baseball cards. They are rarely seen publicly together and particularly not at auction.

For all of us at Goodwin & Company, it is our distinct pleasure to present the Wagner, Plank and Magie cards, in addition to the remainder of baseball’s most significant and historic offering. Look carefully at every name and image. These were men who worked jobs in the off-season, who played for both the love of the game and survival, and who considered themselves “ball players” rather than professional athletes. Marvel at the art, the beauty and the simplicity of style displayed in every card. Study the sweaters and gloves and symbols of the game. Examine the names on every card and consider how they reflect the immigrant character of America as the nation opened its doors to the world. And last but certainly not least, take home a treasured heirloom to be passed down for generations, so that your children and grandchildren will always remember a time when baseball was young. 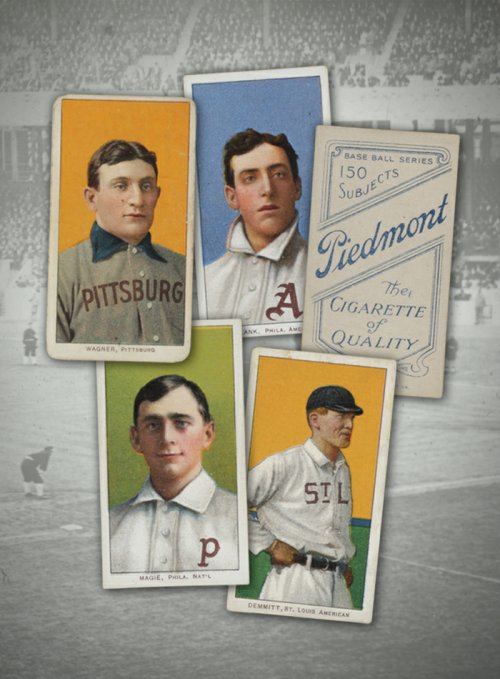