Goodwin & Company is proud to offer one of the legendary cards in the hobby, the Imperial Tobacco card of George Vezina graded 9 mint. This hockey card compares to its baseball tobacco counterpart, the T206 Honus Wagner, and is the only mint copy graded.  114 items offered for sale!  Bidding is in progress and concludes October 4, 2012.  Register or bid at www.goodwinandco.com. Other highlights include:

A spectacular Cracker Jack cards with Joe Jackson and Ty Cobb leading the way. An extremely rare Yamakatsu Mickey Mantle card is one of the only two known. The card pictures “The Mick” in his rookie uniform with the number 6 on the back. Over twenty five T206 Hall of Famers and commons graded PSA 8 or higher are included and led by the one and only PSA 8 example of Hall of Famer Jake Beckley.

Football fans will find a beautiful 1956 Topps set with a minimum grade of PSA 8, a 1952 Bowman Large #72 John Schweder and the highest graded and only PSA 8 1948 Leaf Charley Conerley rookie card. These are just a few of the highlights, but we would be remiss if we didn’t bring to your attention a Pinkerton Cabinet of Hughey Jennings, a Dan-Dee Potato Chip Mickey Mantle and a Mendelsohn Cabinet of Ty Cobb. 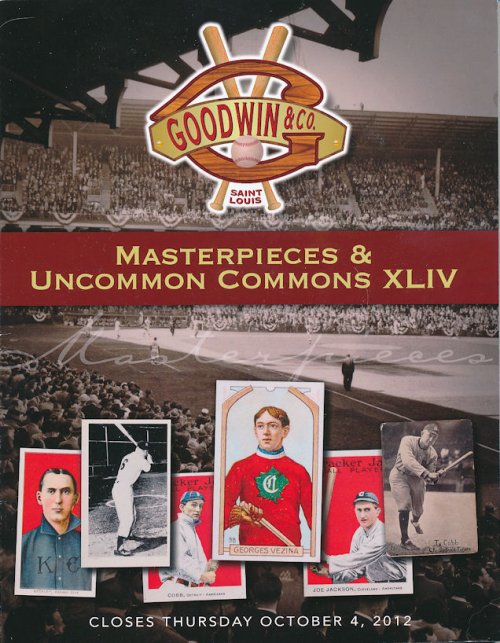