Love of the Game Auctions, an internet-based sports auction house catering to the passionate collector of cards and memorabilia, announced today that its Spring, 2021 Premier Auction is now open for bidding.  The auction closing date is Saturday, April 3, 2021. Bid, view and register for the auction at loveofthegameauctions.com.

The sale features the company’s strongest selection of sports cards in its history, highlighted by one of the most historically important rookie cards in the hobby: a gorgeous 1925 Exhibit Lou Gehrig rookie card. Graded VG 3 (MK) by PSA, the card is a beautiful specimen, sharp for the grade, with a tiny erasure on the reverse accounting for the qualifier.  The 1925 Exhibit Gehrig has experienced explosive growth over the last several years, the most recently-sold example reaching $800,000 at public auction.  Particularly difficult to find, Gehrig rookie cards are rarely made available for public sale, and Major League Baseball’s recent announcement that it will permanently recognize Lou Gehrig Day will only increase its desirability.

Also featured is a beautiful, fresh-to-the-hobby 1952 Topps Mickey Mantle, consigned by a noncollecting family that has owned the card for some time. A stunning example, PSA has graded the card EX+ 5.5.

“The card is a real beauty,” explains Auction Director Al Crisafulli.  “The family had learned about our recent record-breaking sale of a fresh 1952 Mantle a few months ago and reached out to ask about selling theirs.  Their card was part of an inheritance that had been locked away in a trunk for decades.  When the family read about the recent skyrocketing price of sports cards, they reached out.” 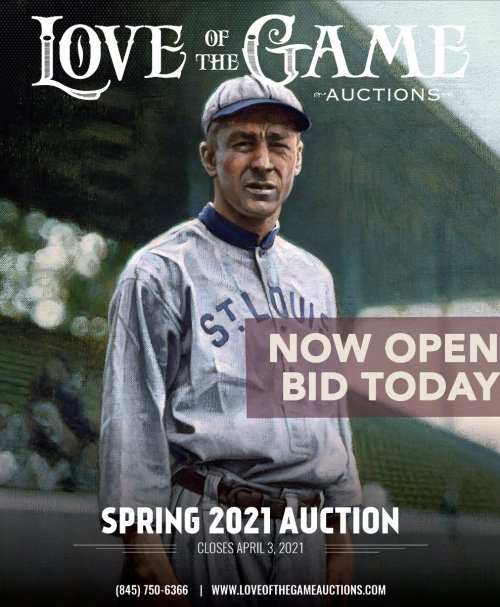 Love of the Game has created a special section of their Spring auction catalog, devoted exclusively to “Great Cards” – important cards from throughout hobby history, from the 19th Century to the present.  The earliest cards among them are three Hall of Fame cabinets from the N173 Old Judge Cigarettes issue of 1888.  The most recent are rookie cards of Giannis Antetokounmpo, LeBron James and Tom Brady.  Inbetween are highlights like the rare 1907 Dietsche Postcards Ty Cobb “Fielding” pose (widely considered his rookie card), beautiful midgrade examples of all four Babe Ruth cards from the 1933 Goudey issue, and a gorgeous 1951 Bowman Willie Mays, graded NM 7 by PSA.

“These cards represent more than a century of highlights from our fantastic hobby,” said Crisafulli.  “We’re presenting them not as blue-chip investments, although they probably are – we’re presenting them as a look through hobby history, a curated selection of sports artifacts from throughout the last 130 years.  We hope to continue to present this type of offering in our future auctions.”

Of course it wouldn’t be a Love of the Game auction without a host of outstanding, seldom-seen memorabilia.  One highlight from this sale is a 1970 Houston Astros flannel uniform worn by pitcher Jim Bouton.

“Jim Bouton was one of the most colorful characters in the history of the game,” explained Crisafulli. “His controversial book Ball Four made him a celebrity, and later in his career he became a popular broadcaster, and co-iniventor of everybody’s favorite baseball gum, Big League Chew.  This uniform comes from his last season (not counting his 1978 comeback), as Ball Four was being published.  He was quite literally wearing this uniform as he was mulling over the book’s amazing final line, ‘You spend a good piece of your life gripping a baseball and in the end it turns out that it was the other way around all the time.’”

Another amazing piece is “Strange Complexities,” an original painting of Hall of Famer Branch Rickey, by renowed sports artist Graig Kreindler.  Kreindler is one of the best-known and most widely-respected names in sports art.  Known for his recent exhibition of more than 200 works commissioned and displayed as part of the Negro Leagues Baseball Museum’s “Black Baseball in Living Color” art exhibit, Kreindler has a waiting list more than five years long for private commissions, and his art rarely becomes available for resale.

The auction also features a host of advertising display material from the collection of former Baltimore Orioles broadcaster Ted Patterson.  Love of the Game has been offering Patterson’s collection over the past year and will continue throughout 2021.  Patterson, a longtime friend of Love of the Game, passed away in February.

Keeping in line with Love of the Game auctions’ specialties, the sale features a large selection of 19th and early 20th Century cards and memorabilia, a host of seldom-seen or unique items, an exceptional grouping of yearbooks and scorecards, and a number of outstanding autographed items.  One of the company’s finest auctions yet, Love of the Game continues to build its reputation as an auction house for unusual items that you don’t see every day.

The final date to bid is Saturday, April 3.  To register for the auction and review the selection online, visit http://www.loveofthegameauctions.com.

Bid on the hobby’s hottest cards.

In addition to our usual assortment of great vintage cards, Love of the Game’s Spring auction features an outstanding selection of more recent cards from the hottest names in sports. Place your bids today!

Football Cards and Memorabilia at Love of the Game: 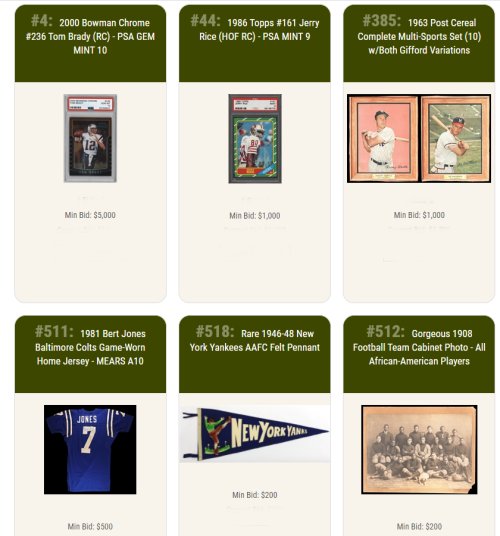 Love of the Game is in the process of assembling its Summer, 2021 catalog auction and “Great Cards” selection, which they hope will prove to be its biggest and most exciting sale yet.  For more information, or to consign your valuable material, contact Love of the Game at info@loveofthegameauctions.com or (845) 750-6366.