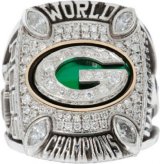 A member of the Green Bay Packers practice squad has put his Super Bowl XLV Championship Player’s Ring up for sale. Heritage Auctions has a 2010 Super Bowl ring listed to be put up for auction. According to Heritage Auctions’ website, bidding on the ring is set to begin July 14th. The ring’s square crest is highlighted by the team “G” logo, incorporating the green and gold colors first introduced in 1935. In each corner is a marquis-cut diamond in appropriate football shape, representing the franchise’s four Super Bowl victories (I, II, XXXI and XLV).
The “G” shape is comprised of thirteen diamonds, one for each NFL title dating back to the first in 1929, with the ninety-two small diamonds blanketing the outskirts and continuing along each edge counting the years since the 1919 founding of American football’s most decorated team. “World Champions” stands in raised lettering amidst the sea of shimmering gemstones.
The left shank reports the name and jersey number of recipient and consignor Jay Ross, whose letter of provenance will attend. A miniature Lambeau Field completes the design.”
Heritage Auctions says the ring tips the scales at a quarter of a pound, and is a size 15.