Even casual golf fans know the legend: green jackets are not allowed to leave the hallowed grounds of Augusta National Golf Club. The actual truth – that this restriction is only a very recent creation – does not detract from the fact that the mystique of owning a green jacket prevails to this day.  Offered in the Green Jacket current Auction is the actual green jacket of 1937 and 1942 Masters Tournament Champion Byron Nelson.

This is just the fourth Masters Champion’s green jacket to ever reach the auction block. All three prior sales have also been by Green Jacket Auctions, the world’s leading golf auction house.

Though we make no claims that Byron Nelson’s green jacket is superior to golf collecting’s recognized Holy Grail, the Horton Smith green jacket, the truth is that many golfers would no doubt prefer to own Nelson’s jacket. Byron Nelson, the supremely likeable Texan, maintains a lofty reputation as one of the greatest to ever play the game. His DiMaggio-like streak of 11 straight PGA Tour victories is widely regarded as golf’s most untouchable record – even more than Jack’s 18 Majors and Snead’s 82 PGA Tour wins. 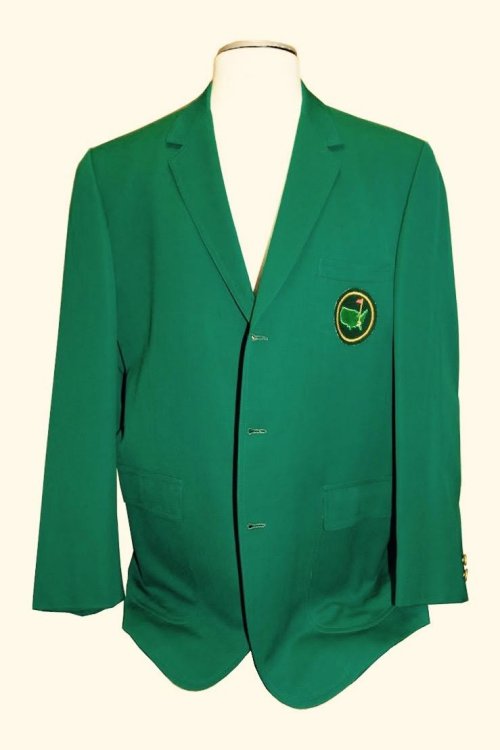 It should be noted that the dearth of Masters Champion green jackets in the collector market is surprisingly not a result of Augusta National owning them. Quite the opposite – most early green jackets were discarded or destroyed in an era when they were merely seen as a symbolic garment, not a significant piece of golf history. A review of Augusta National’s internal records reveals that they do not own a single jacket that was produced prior to 1967. That’s right, ANGC does not own one green jacket (from a member or Champion) from the first 3 decades of the club’s existence.

Jacket Details
This green jacket was produced for Byron Nelson in 1966. Collectors are often surprised to learn that Champions (and Augusta National members) frequently own multiple jackets over their lifetime. Much like how you wouldn’t wear the same piece of clothing for 50+ years, green jackets are no different. Every 10-15 years or so, jackets are often replaced due to wear on the jacket, weight change of the owner, etc. (Nick Faldo has ordered 6(!) green jackets since 1989).

A photographic study of Mr. Nelson’s history in Augusta reveals that he likely owned at least 5 green jackets during his lifetime. The first was one of the so-called “Original 10” jackets awarded in 1949. That jacket almost certainly no longer exists, as there is no record of it beyond the 1950s. The manufacturer’s tag on the inside of this jacket states that it was produced for Byron Nelson in May of ’66 – which means it was likely ordered by Nelson while in Augusta in April for the 1966 Masters, and delivered a few weeks later. Nelson can be seen wearing this exact jacket in numerous photos from the late 1960s and throughout the 1970s. (This green jacket is particularly easy to photo match because it is quite unusual compared to most other green jackets. It has large side pockets (with top flap) that are entirely sewn onto the exterior of the jacket, as well as a skinny lapel with thick diagonal stitching at the collar).

At some point in the early 1980s, a new green jacket was produced for Mr. Nelson to replace this one. He wore that jacket for several years before apparently getting yet another green jacket later in life. We do not know whether either Augusta National or the Nelson family still owns one of these later green jackets, though if they do, such jacket would be decades newer than the offered green jacket.

We are almost certain that this 1966 Byron Nelson green jacket is the earliest (and, therefore, most significant in collecting appeal) Byron Nelson green jacket in existence. We expect investment-minded collectors to be paying close attention to this auction. With the possible exception of the record Horton Smith green jacket, no finer Masters Champion’s green jacket has ever been publicly offered for sale. In the years to come, we suspect that fact will forever remain true.

Byron Nelson’s green jacket is offered for auction with No Reserve. It has resided in an overseas collection for years. At the conclusion of this auction, perhaps it will finally find its way home.