More than 950 generously illustrated, premium-quality sports memorabilia lots are now available to peruse and bid on in Grey Flannel’s Summer Games Auction. All major sports are represented, with an emphasis on provenance, authenticity and rarity throughout. Online bidding has begun and will continue through June 26.

The sale opens with an unimprovable pair of 1984-85 Michael Jordan rookie game-used and autographed shoes that were gifted by Jordan to his favorite college photographer, Robert Crawford. Jordan had known Crawford from the basketball phenom’s days on the hardcourt at the University of North Carolina. After he was drafted by the Bulls and left UNC, Jordan was thrilled to reunite with Crawford on the road following a game against the Indiana Pacers. “That’s where Jordan took the iconic ‘Chicago’ colorway shoes right off his feet and gave them to Crawford,” said Grey Flannel Director of Operations Michael Russek. “The shoes are accompanied by a letter of authenticity from Robert Crawford, attesting to their history.” With weeks of bidding still ahead, the sneakers have already been bid to $117,900.

Offered as Lot #301 is Hall of Famer Stan “The Man” Musial’s 1943 World Series game-used and photo-matched road uniform from his National League MVP season. Musial won his first of three MVP awards in the ‘43 season, batting .357 with 48 doubles, 20 triples and overall 220 hits in just his second full season. A Photo-Match.com LOA confirms the uniform’s authenticity. The current bid is $88,000.

Lot #159 is an autographed, game-used and photo-matched jersey that running back Barry Sanders wore during his unforgettable 225-yard and two-touchdown performance on October 14, 1990 against the Kansas City Chiefs. Perhaps the most electrifying football star of the 1990s, Sanders finished his brilliant 10-year career with 15,269 yards rushing and 109 touchdowns. This is the earliest known photo-matched Sanders jersey to enter the hobby. It was matched to an early season game by a sleeve repair, which indicates prior use and could possibly be a carryover from his rookie season. A Photo-Match.com LOA confirms the match and grades the jersey a perfect 10. Bidding currently stands at $19,489. 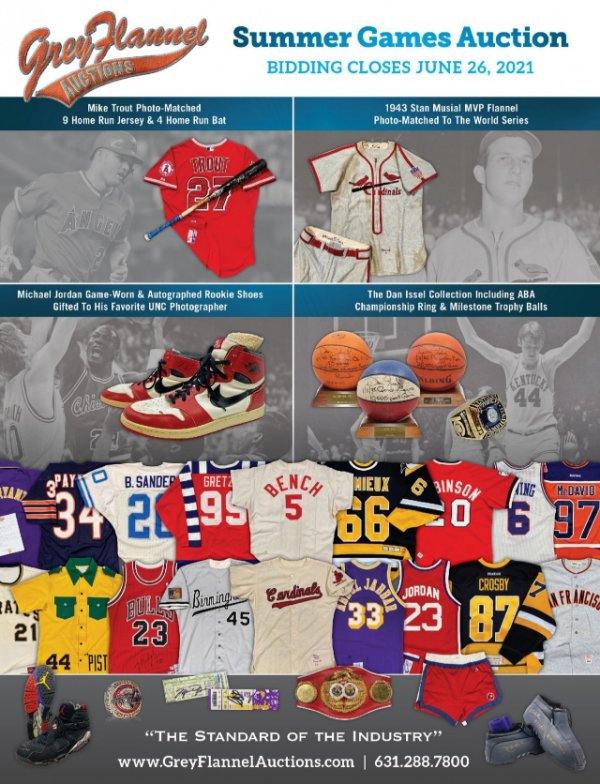 Few players in recent memory have had such an immediate impact on the game of baseball as Los Angeles Angels of Anaheim outfielder Mike Trout. Lot #250 features the three-time MVP’s 2018 autographed game-used bat that has been photo-matched to four home runs. The bat comes with a PSA/DNA LOA and is currently bid to $9,746. Lot #251 showcases a 2015 Mike Trout game-used alternate jersey that has been photo-matched to nine home runs and 42 total hits. Bidding stands at $25,941. Both Mike Trout lots are accompanied by an Anderson Authentics LOA and photo-match documentation.

Lot #299 is a 1970 game-used home flannel jersey from two-time MVP and perhaps the best catcher in major league history, Johnny Bench. Bench won his first MVP in 1970 belting a career best 45 home runs, driving in 148 runs and also winning one of his 10 Gold Gloves. The jersey features great use on the shoulders where the chest protector was worn and where Bench’s catcher’s gear would clip onto the sides. The jersey comes with a Reds Executive LOA and a Photo-Match.com LOA grading the jersey a perfect 10. Current Bid: $55,000

The 56th edition of the fully illustrated catalog detailing all lots is now available to view online at www.greyflannelauctions.com. Bidding will close on Saturday, June 26, 2021. For additional information on any item in the auction or to make an appointment to inspect auction goods in person at Grey Flannel’s Scottsdale showroom, please call 631-288-7800 or email info@greyflannelauctions.com.

Grey Flannel Auctions has been the standard of the sports memorabilia industry for more than 30 years. Family owned and operated from a gallery and offices in Scottsdale, Arizona, Grey Flannel Auctions specializes in vintage game-used jerseys and high-end autographs, and has represented consignments and estates from some of the most revered athletes across the entire realm of professional sports.