Grey Flannel Auctions current auction is online. Bidding for this sale opened June 4th and runs through June 27, 2018. Bid, view and register for the auction at www.greyflannelauctions.com/catalog.aspx.  Over 800 items of sports memorabilia, sports cards, autographs, Americana memorabilia, game used items and much more all up for auction.  View our E-catalog here.

Sports memorabilia collectors know that as the weather begins to heat up, Grey Flannel Auctions summer catalog is right around the corner. Nearly 900 generously illustrated, premium-quality lots are available to preview in the newly published catalog online at www.GreyFlannelAuctions.com. Bidding closes on June 27.

All major sports are represented, with an emphasis on provenance, authenticity and rarity throughout. 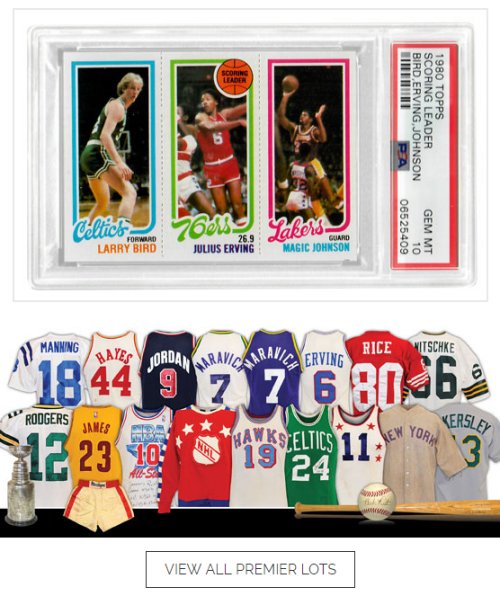 The opening lot is an incredibly rare, high-grade 1961 Fleer basketball card set. Every card has been professionally encapsulated and graded by PSA at a tremendous “MINT 9.” This set has the second-highest-weighted GPA on the PSA set registry and is perhaps the most sought-after basketball set ever offered within the hobby. Superstars represented in the set include Wilt Chamberlain, Hal Greer, Sam Jones, Oscar Robertson, Lenny Wilkins and Paul Arizin. Opening bid: $25,000

Dennis Eckersley’s 1988 World Series jersey, which he wore while serving up the iconic walk-off home run to injured Dodgers slugger Kirk Gibson, is a true piece of baseball history from one of the sport’s most recognizable moments. This jersey is accompanied by Letters of Authenticity from the A’s equipment manager, the Baseball Hall of Fame, and the Dodgers, thanking the jersey’s owner for allowing the organization to display this relic in Chavez Ravine’s last season. The historic, game-used jersey representing America’s pastime and LA’s last championship is entered as Lot 513, with an opening bid of $10,000.

Two basketball legends, Richie Guerin and Pete Maravich, wore the very same #19 Atlanta Hawks jersey; one as he was ending his Hall of Fame career and the other as he was just beginning his. In this sale Grey Flannel offers “Pistol” Pete Maravich’s 1970-71 NBA game-used rookie debut jersey that was also worn by Richie Guerin during the prior season. The style was retired at the start of the 1970 regular season. This hardwood rarity worn by two Hall of Famers has been graded a perfect 10 by Photo-Match.com due to its outstanding condition and rarity. Entered as Lot 42, the jersey has a minimum opening bid of $10,000.

Jerry Rice is widely considered to be the greatest wide receiver in NFL history. Grey Flannel will auction the photo-matched San Francisco 49ers jersey Rice wore during his greatest statistical game on December 18, 1995 in primetime on Monday Night Football. Rice caught 14 passes for 289 yards and scored three touchdowns in a 37-30 shootout victory over the Minnesota Vikings. You’d be hard pressed to find a better Rice example than this hobby-fresh piece from the Hall of Famer’s most legendary NFL game. Cataloged as Lot 206, the jersey requires an opening bid of $2,500.

Grey Flannel Auctions has been the industry standard for more than 25 years. Family owned and operated in Scottsdale, Arizona, Grey Flannel Auctions specializes in vintage game-used jerseys and high-end autographs. The 50th edition of the fully illustrated catalog detailing all lots in their Summer 2019 Auction is now available to view at www.greyflannelauctions.com. Bidding closes on June 27.