Grey Flannel Auctions May 30th Summer Games Auction is open for bidding online in its entirety. The auction features nearly 800 lots of game-used and autographed sports memorabilia as well as entertainment items and Americana. Bidding is in progress and concludes May 30, 2012. Contact us at (631) 288-7800 or at info@greyflannelauctions.com for additional information or photos on a specific lot. Highlights include the following:

INITIAL BIDS REMINDER | Please remember that initial bids must be placed prior to 9:00 PM EST on Wednesday, May 30, 2012 if you wish to participate in the extended bidding portion of our auction. After this 9 PM rule is in effect, bidding on each lot will be limited to only those bidders who have previously placed their initial bids on that specific lot.

• If you have any questions concerning our bidding procedures, please contact us at (631) 288-7800 or info@greyflannelauctions.com.

• Upgrade to Premier Bidder status by contacting Debbie at (631) 288-7800 x223 or debbie@greyflannelauctions.com 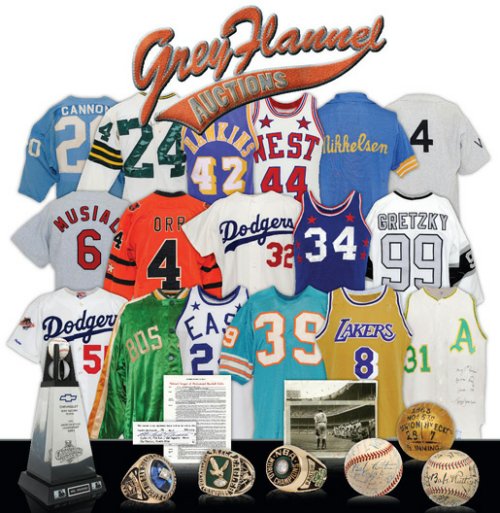