Grey Flannel Auctions is proud to offer the ultimate Kobe Bryant collection to coincide with his final season in the NBA. Lots No. 530 through Lot No. 556 are Bryant jerseys, warm-up jackets, shooting shirts and sneakers from different points throughout his storied career, including championship seasons, MVP seasons, scoring champion seasons and the like.

Highlights include a 2008 game-used and autographed home jersey, an autographed rookie road jersey, a photo-matched ‘Noche Latina’ jersey worn when Bryant scored 36 points and grabbed 14 rebounds during an MVP season, a 2012 Christmas Day autographed game-used uniform when he scored 34 points, and unique sneakers, such as the ones he wore with a special colorway for Martin Luther King Day, and a pair in which he scored 40 points in a playoff game. (view collection) 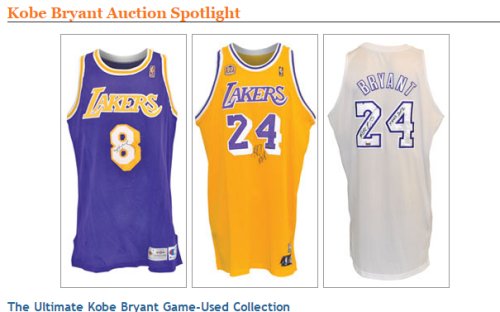