Grey Flannel’s annual Summer Games Auction, which perennially features the finest in game-used memorabilia from all major sports, is open for bidding. This year’s Summer Games lineup is available to view/bid online now, with Internet and absentee bidding running through Wednesday, June 5th.    Highlights include:

Photomatched to Career Touchdown #146!
Jerry Rice is a three-time Super Bowl Champion, a thirteen-time Pro Bowl selection and was elected to the Hall of Fame in 2010. In 1995, Rice caught a career-high 122 passes for a then-NFL record 1,848 receiving yards and 15 touchdowns (along with 1 touchdown each by way of running, passing, and recovering a fumble). This helmet was worn on October 15, 1995 in a week 6 matchup vs the Indianapolis Colts in which Rice caught career touchdown pass #146! 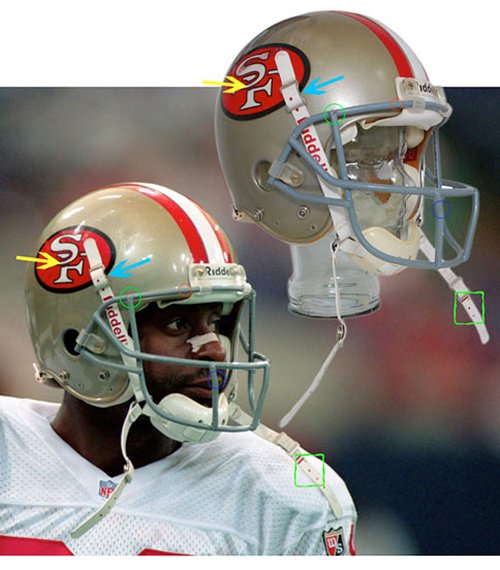 A member of both the college and professional football halls of fame, he was ranked by NFL Top 10 as the most elusive runner in NFL history. Averaging over 1,500 rushing yards per season, Sanders left the game just 1,457 yards short of being first place on the list for the NFL all-time rushing record at that time. This jersey was worn on October 22, 1995 at RFK Stadium vs. the Washington Redskins….

This is the best Davis jersey in the hobby. T.D. was a two time Super Bowl Champion, a two time AP Offensive Player of the Year, the 1998 NFL & Super Bowl MVP and was a member of the Broncos 50th Anniversary Team. On the left front tail is the “Wilson” manufacturer’s tag with wash instructions. Attached is a flag tag with size “42”. Adjacent is the year “95” strip tag. Player number “30” appears on the front..