Grey Flannel Auctions’ 2012 Holiday Auction is now under way, with every major sport well represented in dozens of coveted Premier lots. In all, 704 lots have been selected for the absentee and Internet auction that closes for bidding on Dec. 12, 2012. In addition to game-used apparel and equipment, important autographed equipment and balls; awards, championship jewelry and athletes’ personal ephemera are up for bid.  Incredible photomatched game-used memorabilia spanning all four major sports including Hall of Famers, All-Stars, Rookies of the Year and Cy Young Award Winners.

The auction opens with the headliner: the Earliest Known Babe Ruth Pinstripes from 4/13/1921, that year’s Opening Day for the New York Yankees. Ruth’s game-used home flannel pants are offered together with multiple photomatches of the Bambino wearing them in front of the Yankees dugout. As a historical footnote, the Babe didn’t disappoint the legion of fans that turned out for the 1921 opener. He went 5-for-5 at the plate on that day 91 years ago. 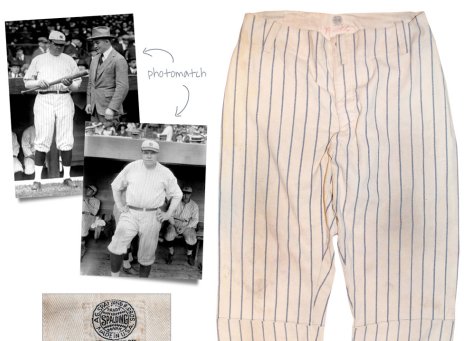 The Babe Ruth pants are a size 42 and as iconic as the stocky slugger who wore them. Richard E. Russek, president of Grey Flannel Auctions, observed: “These pinstripes are a piece of American and baseball history that you can actually touch, and they’re directly linked to one of baseball’s immortals – Babe Ruth.” The lot has a minimum bid of $25,000.

Another memento of baseball’s early days is a 1916-18 Ty Cobb Detroit Tigers Game-Used Bat, accompanied by a letter of authenticity from PSA/DNA that grades it GU9.5. The remnants of tobacco juice as well as numerous cleat marks can be found on this baseball treasure from the swashbuckling Georgia Peach. Displaying excellent game use, the historic bat will open at $10,000.

A unique and one of a kind piece of sports history is offered – Orel Hershiser’s Los Angeles Dodgers 59 scoreless innings streak game-used baseball from his magical 1988 season. This is the very baseball that “Bulldog” walked off the mound with to end his historic streak, which still stands nearly a quarter-century later. The ball comes directly from Hershiser with his signed letter of authenticity. It is entered in the auction with a minimum bid of $25,000.

Basketball highlights include Hall of Famer Robert Parish’s 1986 Celtics Championship Ring with a letter of authenticity from Parish, a circa-1966 Jerry Lucas Cincinnati Royals game-used home jersey as well as a 1974-75 Nate “Tiny” Archibald Kansas City/Omaha Kings game-used and autographed home jersey that is the finest known example. 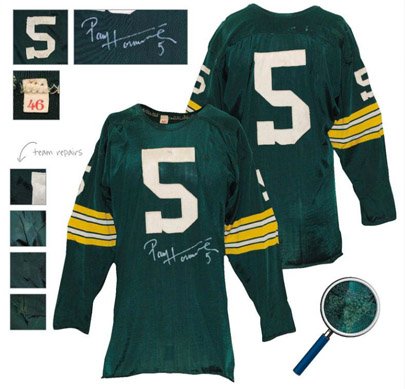 Bidding in Grey Flannel’s Holiday Auction will close on December 12, 2012. All forms of absentee bids are being accepted, including by phone and online through Grey Flannel’s website at www.GreyFlannelAuctions.com. Printed catalogs are free to all registered bidders while supplies last. The fully illustrated electronic version of the catalog is available to view online. For additional information, call 631-288-7800, ext. 223; or email info@greyflannelauctions.com.