Sports memorabilia collectors know the holiday season has arrived when Grey Flannel Auctions announces its December auction catalog is ready. That time has come, with almost 1,000 generously illustrated, premium-quality lots now available to peruse and bid on at www.GreyFlannelAuctions.com. All major sports are represented, with an emphasis on provenance, authenticity and rarity throughout the auction lineup.

Baseball fans who’ve ever dreamed of going back in time to experience the electrifying era of the one and only Babe Ruth can come close to that feeling with the sale’s first four lots. Lot 1 is a fabulous photo of the Bambino in a casual pose with his arm around another Yankee legend, Lou Gehrig. The shot was taken during the 1927-28 Barnstorming tour, which pitted the Bustin’ Babes against the Larrupin’ Lou’s and produced some of the most star-studded exhibition games in baseball history. The 8 x 10-inch photo is clearly signed by both men in black fountain pen and stamped on verso “OFFICIAL SOUVENIR PHOTO Home Run Tour BABE RUTH and LOU GEHRIG – CHRISTY WALSH MANAGEMENT.” Grey Flannel Auctions’ president, Richard Russek, observed that it is “incredibly rare to find any version of this photo signed by both players in this excellent condition.” With a full JSA LOA, it requires a minimum bid of $5,000.

Next up, at Lot 2, is a high-grade 1928 Babe Ruth single-signed baseball that was obtained when the Yankees played the Toledo Mud Hens in a deal arranged by Casey Stengel. The consignor’s family owned housing near the ballpark and rented rooms to members of the Toledo club. On Sept. 13, 1928, a member of the family obtained the ball in person at the ballpark, and it has remained in the family ever since. Lot 3 is beautiful sepia-tone photo of Babe Ruth in his Yankees uniform, swinging a bat. Boldly signed in black fountain pen, it is rated 9+ overall. Lots 2 and 3 both come with a full JSA LOA and open for bidding individually at $2,500. 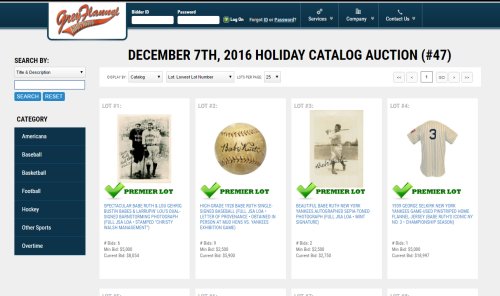 Babe Ruth’s iconic number “3” lived on following the incomparable slugger’s retirement and was inherited by the Yankees’ next right fielder, George Selkirk. A worthy successor to play that position, Selkirk was a two-time All-Star and five-time World Series champion. His 1939 Yankees game-used pinstriped home flannel jersey with the Babe’s number 3 on the back is a true collector’s prize and is entered as Lot 4 with an opening bid of $5,000.

From an earlier and equally fascinating era of baseball, Lots 218 through 220 contain Christy Mathewson items from the 1910 Manhattan Championship, a competition that evolved into the modern-day Subway Series. The New York Highlanders and the New York Giants garnered more excitement in those games than the World Series and spawned an inner-city rivalry that has endured for over a century. These three lots feature Mathewson’s watch fob, pin-back photo-ID badge, and most importantly, his Championship player’s ring. Made of 14K gold, the ring has a central European-cut diamond on the front, encircled by the die-struck words “New York Champions 1910.” On both sides of the shank, the name “Mathewson” appears above a spread-winged eagle. An absolutely unique memento of the first great pitching star of the modern era, the ring comes with a raft of documentation going back to baseball agent Christy Walsh’s law firm. It opens for bidding at $10,000.

After ending a 108-year drought and capturing their elusive third World Series Championship, the Chicago Cubs now move into the auction spotlight with game-used memorabilia from some of the ball club’s greatest players of the past. Lot 96, a Fergie Jenkins game-used home flannel jersey from his 1971 National League Cy Young Award season is photo-matched to his start on August 20 of that year. Lot 97 is a signed, 1974 game-used road jersey from another all-time Cubs great, Hall of Famer Billy Williams. Both lots open at $2,500.

Grey Flannel has the hardcourt side of Chicago sports fandom covered as well, starting with a pair of “Hare Jordan” sneakers worn by Bulls superstar Michael Jordan on the set of a commercial that ran during the 1992 Super Bowl. In that memorable teaming of icons, Jordan shared the billing with another fleet-footed personality, Bugs Bunny. This commercial would lead to the idea for Space Jam, one of the most culturally significant films in sports history and the highest-grossing basketball film of all time. The shoes were signed by MJ and gifted to his body double, who is the consignor. Reserve: $2,500. Other significant game-used Jordan items include jerseys – one of them from the 1986-87 season – plus sneakers and basketballs from his dominant run from 1992-97.

This year, the world lost the great Muhammad Ali, one of the most important boxers and cultural figures of all time. To celebrate some of Ali’s career highlights, Grey Flannel is offering Lot 348, a 1971 paycheck issued to Muhammad Ali from Bob Arum as “The Fight Of The Century” purse compensation; and Lot No. 349, a one-of-a-kind pre-Olympics 8/1/1960 Cassius Clay handwritten and signed letter with an LOA from the recipient. Each has a $2,500 reserve.

From the heights of American historical pop culture comes Lot 363, a John F. Kennedy-signed invitation to his birthday party and Gala All-Star Show held at Madison Square Garden on 5/19/1962. This is the event at which Marilyn Monroe famously sang “Happy Birthday, Mr. President.” Along with other photos and materials from the party, the group lot opens at $2,500.

In addition to the 700 lots featured in the printed catalog, our December 7th sale also features 300 lots that are available online-only.
These late additions can be viewed in our overtime section by clicking here.

The fully illustrated electronic version of the December 7 catalog is available to view online at www.GreyFlannelAuctions.com. For additional information on any item, call 631-288-7800, ext. 223; or email info@greyflannelauctions.com.