Grey Flannel Auctions has announced details of its Ninth Annual Basketball Hall of Fame Auction to be held online at www.greyflannelauctions.com. Bidding will open on July 29 at 10:00 a.m. EST and conclude on August 20. Highlights include:

Lot #1: Earvin “Magic” Johnson’s game-used and autographed Los Angeles Lakers home jersey dating to the 1988-89 season in which he was crowned league MVP. The jersey has been photo-matched and was originally sourced from the late Dr. Jerry Buss, owner of the Lakers. It is accompanied by a Lakers letter of authenticity and carries a reserve of $5,000.

Lot #62: A game-used and autographed Brooklyn Nets jersey worn by Jason Collins, the first openly gay athlete to play in any of four major professional sports leagues. The jersey dates to March 3, 2014, his first home game after making his announcement. The jersey is accompanied by a letter of authenticity from NBA Entertainment and has a reserve of $2,000.

Lot #104: Three-time NCAA Player of the Year Oscar Robertson’s game-used jersey from his playing days at the University of Cincinnati. The jersey was originally sourced from a college employee and carries a reserve of $5,000.

Lot #152: A gold medal from the 2000 Sydney Olympics presented to Vin Baker of the USA men’s national basketball team. The medal is accompanied by two letters of authenticity from Baker and is entered in the auction with a $35,000 reserve.

Lot #154: Russell Wilson’s playoff game-used Seattle Seahawks jersey from the January 11, 2014 matchup against the New Orleans Saints. Wilson and his teammates won the game to advance to the NFC title game en route to the franchise’s first Super Bowl win. Accompanied by a Seahawks letter of authenticity, its reserve is $15,000.

Lot #209: Hall of Fame catcher Gary Carter’s 2004 Harley-Davidson motorcycle given to him by the New York Mets following his induction into the Baseball Hall of Fame. Proceeds from the sale of The Kid’s “hog” will directly benefit The Gary Carter Foundation and the Autism Project of Palm Beach County, Florida. Reserve: $2,500.

Lot #364: Hall of Famer Stan Musial’s game-used St. Louis Cardinals jersey from 1950, the year in which “Stan the Man” compiled the longest hitting streak of his career (30) and was crowned the National League batting champ with a .346 average. The reserve on this item is $5,000.

Lot #366: Hall of Famer Jimmie Foxx’s game-used bat dating to 1930, the season in which he and his Philadelphia Athletics teammates were crowned World Series Champions. “Double X’s” lumber carries a reserve of $5,000.

The fully illustrated electronic version of the catalog is available to view online at www.GreyFlannelAuctions.com. For additional information on any lot in the sale, call 631-288-7800, ext. 223; or email info@greyflannelauctions.com. 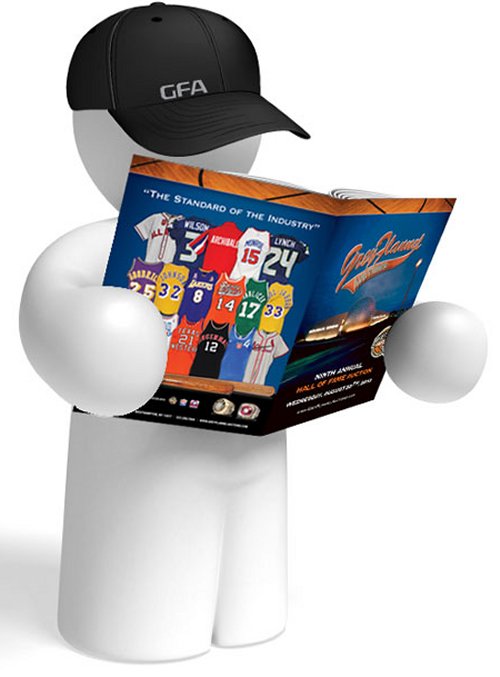