More than 850 lots of generously illustrated, premium-quality sports memorabilia items, including important game-used apparel and autographed material, are now available to view and bid on at Grey Flannel Auctions’ website. All major sports are represented, with an emphasis on provenance, authenticity and rarity throughout. Bidding will close on January 23, 2021.

Auction Lot #1 is the late Hall of Famer Kobe Bryant’s 2009 NBA Finals game-worn jersey. In that series, Bryant and the Los Angeles Lakers defeated the Orlando Magic in five games, with Bryant capturing his first Finals MVP award. Bryant wore this road jersey on June 9, 2009 in Game 3, scoring 31 points while adding eight assists and three rebounds. The jersey has been authenticated by Photo-Match.com and comes with a letter of authenticity from the NBA. A rare offering from one of the NBA’s all-time greats, Lot 1 has a current bid of $74,022.

Michael Russek, Grey Flannel Auctions’ Director of Operations, commented: “This is the most historically significant Kobe uniform to hit the market since his unfortunate passing. Hobby-fresh and photo-matched, this jersey is likely to set an industry record. We are excited to see how the market will react to a piece of this magnitude.”

Offered as Lot #10, a Chicago Bulls jersey was worn by the legendary Michael Jordan from his now famous “Last Dance” season in which he was honored as regular season and NBA Finals MVP. The jersey comes with pristine provenance and is accompanied by extensive documentation including a Chicago Bulls LOA along with the tent card and entry ticket to the FestaBulls fundraiser where the jersey was originally sold. A Photo-Match.com LOA confirms the match to a 105-97 victory against Reggie Miller and the Indiana Pacers which improved their season record to 39-15. Jordan led the way for the Bulls, scoring 27 points while adding 6 assists and 4 rebounds. Lot #10 has a current bid of $108,378.

Lot #229 features what is likely the last flannel uniform worn by arguably the greatest player in Major League Baseball history: Willie Mays. The San Francisco Giants started the 1972 season wearing flannels and then switched to knits. Mays was traded to the Mets 19 games into the 1972 season and never wore a knit as a Giant. This road flannel uniform was originally donated by Mays to Willie McCovey and was on display at McCovey’s restaurant in Walnut Creek, California. The uniform is accompanied by a Photo-Match.com LOA grading the jersey a perfect 10. An incredible memento of America’s pastime, Lot #229 currently has a leading bid of $14,641.

The horse Affirmed joined racing immortality by winning the 1978 Triple Crown, horse racing’s greatest accomplishment. The offered sterling trophy offered as Lot #136 is the one that was issued to Hall of Fame trainer Lazaro Barrera and autographed by jockey Steve Cauthen, who piloted Affirmed to the Triple Crown while only 18 years of age. The trophy comes with the original velvet bag in which it was issued and the white gloves for handling. Unquestionably one of the most significant horseracing pieces ever made available to the collecting public, Lot #136 is currently bid to $27,500.

Highlights from the auction include: 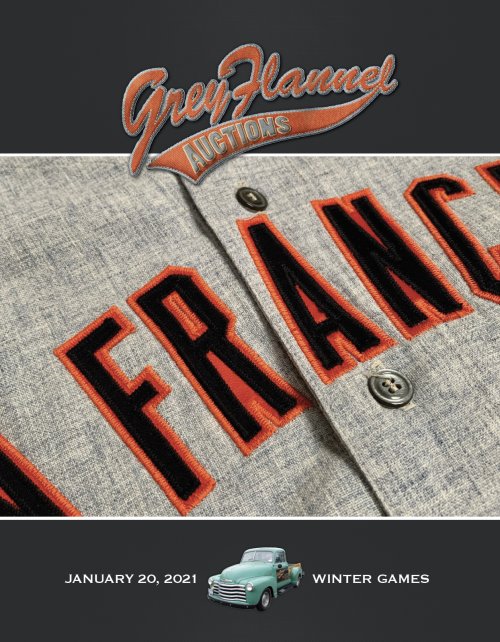 Family-owned Grey Flannel Auctions (GFA) has been the Standard Of The Industry for more than 30 years. Headquartered in Scottsdale, Arizona, GFA specializes in vintage game-used jerseys and high-end autographs. The 54th edition of the company’s award-winning fully illustrated catalog is now available for viewing and online bidding through January 20, 2021 at GreyFlannelAuctions.com. For questions about any item in the auction, please call 631-288-7800 or email info@greyflannelauctions.com.