More than 750 lots of generously illustrated, premium-quality sports memorabilia items, including important game-used apparel and autographed material, are now available to view and bid on at Grey Flannel Auctions’ website. All major sports are represented, with an emphasis on provenance, authenticity and rarity throughout. Bidding will close on July 22, 2020.

Highlights from the auction include:

For more than 50 years, former professional sports equipment manager Herb Norman carefully stored away cherished mementos acquired while working for the New York Mets and Jets, including legendary quarterback Joe Namath’s 1965 rookie jersey. Norman’s career highlights include serving as the equipment manager for both the 1973 Mets World Series team and the 1969 Jets Super Bowl III team, which Namath led to an unforgettable 16-7 upset victory over the heavily favored Baltimore Colts. Recently the Norman family entrusted Grey Flannel Auctions to handle their prized collection, which headlines a July 22 online auction packed with scrupulously authenticated and provenance-backed treasures from all major sports. More than 750 generously illustrated, premium-quality lots are now available to peruse and bid on at GreyFlannelAuctions.com.

The Namath jersey was gifted to Herb Norman’s son by the Hall of Famer himself. Emblazoned “NAMATH” and “12,” the distinctive green-and-white jersey has been authenticated by Photo-Match.com and is the earliest known example of a Namath rookie jersey ever to appear in a public sale.

“The Namath jersey is one of the most historically significant football pieces to ever hit the market,” said Michael Russek, Grey Flannel Auctions’ Director of Operations. “It’s hobby-fresh and photo-matched to multiple games from Namath’s rookie campaign. We’re excited to see how the market reacts to a piece of this magnitude and believe it’s likely to set an industry record.” Graded a perfect 10, its current bid stands at $23,582. The family archive also includes a 1969 New York Jets Super Bowl III Championship ring and 1973 New York Mets National League Championship ring.

The auction of 750+ lots will open with a hoops classic: the only known 1954-55 Syracuse Nationals Championship jacket worn by 12-time All-Star and Hall of Famer Dolph Schayes. The jacket is a unique and special offering that has been sourced directly from the Schayes family. Accompanied by a Schayes family LOA, its present high bid is $7,321.

Lot 7 is a pair of Converse basketball shoes worn by the incomparable Michael Jordan during his time at the University of North Carolina. Jordan’s monumental legacy began at North Carolina when he hit a mid-range jumper with 15 seconds remaining to win a national championship for the Tar Heels. Witnesses to basketball history, the shoes were sourced from Jordan’s cousin, who acquired them at Sotheby’s. They are accompanied by a Basketball Hall of Fame LOA and full JSA LOA, and currently have a leading bid of $8,054.

Under new ownership and management in 1914, the Boston Braves accomplished nothing short of a miracle when they won the World Series that year. Grey Flannel is offering as Lot 90 the mint-condition World Championship 14K gold pin presented to Braves owner James E Gaffney. The circular medallion features at its center the original small single diamond; Gaffney’s name is engraved on the back. Absolutely fresh to the hobby, this award was presented over a century ago and is the early baseball equivalent of a modern World Series ring. Sourced directly from the Gaffney family and accompanied by an LOA provided by them, it is currently bid to $6,050.

Hall of Famer Frank Robinson was the first Black manager in Major League Baseball history, as well as an esteemed member of the storied “500 Home Run Club.” Robinson’s 1970 World Series game-used home jersey, entered as Lot 174, carries tremendous importance, since his two-run homer during Game 5 of the Series was instrumental in clinching the Championship for the Baltimore Orioles, 4 games to 1, over the Cincinnati Reds. The Robinson jersey is autographed, photo-matched and graded a 9. It has been authenticated by Photo-Match.com, is accompanied by a full LOA from JSA and currently has a bid of $10,721.

Family-owned Grey Flannel Auctions (GFA) has been the Standard Of The Industry for more than 30 years. Headquartered in Scottsdale, Arizona, GFA specializes in vintage game-used jerseys and high-end autographs. The 54th edition of the company’s award-winning fully illustrated catalog is now available for viewing and online bidding through July 22, 2020 at GreyFlannelAuctions.com. For questions about any item in the auction, please call 631-288-7800 or email info@greyflannelauctions.com. 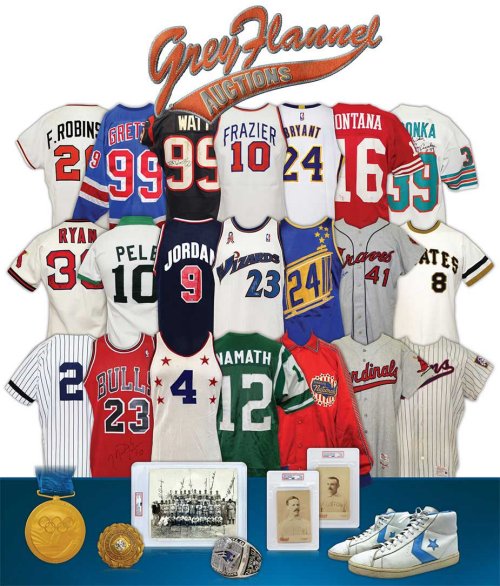